Two more individuals have responded to rumors of their involvement in a chatroom with Jung Joon Young, which contained illegal hidden camera footage.

Of the people reported to be in a chatroom was someone referred to as “H,” which was rumored to be someone named Heo Hyun.

The agency of a model named Heo Hyun denied the rumors through the following statement:

Hello
This is Agency Garten.

Garten model Heo Hyun has been under suspicion of being included in a controversial KakaoTalk chatroom with celebrities. However, Garten’s Heo Hyun only has the same name and is not acquainted at all. He has no relation to this matter.

In addition, we will take strong legal action on cases of malicious posts and comments causing defamation and harm, so please take caution.

Also rumored to be part of the group chat was Kwon Hyuk Joon, who has been introduced on “I Live Alone” as Jung Joon Young’s friend. He is also known as the older brother of Girls’ Generation’s Yuri.

On March 12, he replied to various comments via Instagram. To one comment calling him out, Kwon Hyuk Joon wrote, “Hello to you who is hiding under the shadow of anonymity. I am diligently cooperating with all investigations, and I don’t think you have a right to judge whether or not I can hold my head up with a committed crime.”

He added that he was only included in a work-related KakaoTalk room when starting up Milddang Pocha (romanization), an outdoor establishment run by Seungri, Jung Joon Young, and other friends. He continued, “I do not know anything about the sexual escort services or what is being mentioned in the news.”

In response to another comment, he replied, “Such a long amount of time has passed, and I am very worried as it has become this big issue now. I hope this will not affect my family.” 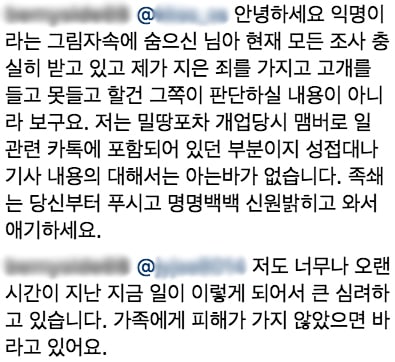 He shared in a reply to a third commented, “I am so apologetic to fans of Yuri. I just considered it as a matter from so long ago and was living in ease. I will reflect on myself more.”