Further accusations have been made against Jung Joon Young and the group chatroom where illegal hidden camera footage was shared.

Yesterday evening, SBS reported that Jung Joon Young was one of the celebrities involved in a chatroom that included BIGBANG’s Seungri, other male singers, and non-celebrity acquaintances where illegal hidden camera footage was shared. SBS stated that there were 10 months’ worth of data in records of conversations dating back to late 2015 through a restored Excel file.

On the March 12 episode of SBS’s “8 O’Clock News,” more of the conversations were reported. SBS reported that the conversation showed that the participants of the chatroom had talked about criminal acts and been aware that what they were doing was illegal.

On April 17 of 2016, a non-celebrity named Kim sent his own sex video. A participant labeled as “Singer Choi” replied, “What the, she’s passed out,” and Kim replied, “So what if she is?” Choi asked Kim “Send a (video) of a living woman” and Jung Joon Young said, “It was rape” with symbols of laughter.

In other messages, an acquaintance described how he had had sex with a woman after giving her sleeping pills, and Jung Joon Young disparaged the woman.

A reported message from Jung Joon Young also said, “Let’s all meet online and go to a strip bar and rape [someone] in a car.” This may be referring to an online game. An acquaintance named Park replied, “We do that in real life too, you know.”

Singer Choi agreed, and Park added, “This is a movie. Think about it for five minutes. We just didn’t murder, a lot of bastards have gone to jail for that.” 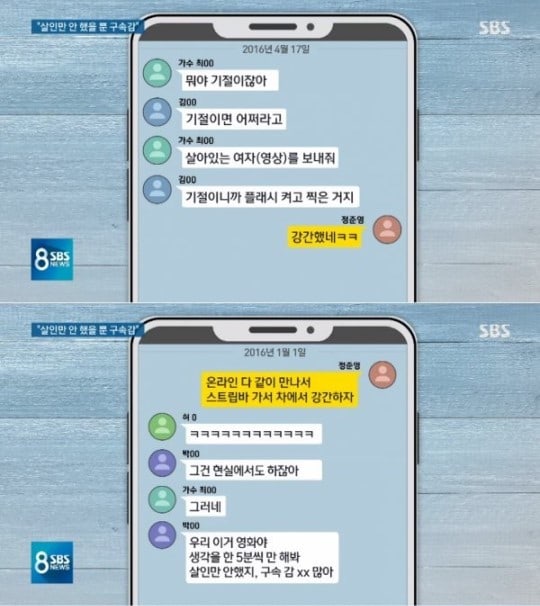 SBS stated, “As though it was a habit, Jung Joon Young filmed women and treated them like objects. Despite knowing that these actions were crimes, he showed that he enjoyed filming illegal videos.”

Jung Joon Young had been working overseas when the news was first reported, and has now returned to Korea, where he has been booked by the police in relation to allegations of spreading illegally-taken videos.