The messages were sent after Choi Jong Hoon’s drunk driving incident in February 2016. He received a fine of 2.5 million won (approximately $2,200) and had his license suspended for 100 days. A statement from FNC Entertainment earlier on March 13 confirmed that he kept the incident quiet and did not tell his agency.

On SBS’s “8 O’Clock News,” text messages were shared that show a discussion in the group chatroom about a payment being made to cover up the incident.

According to a recreation of the KakaoTalk messages in the report by SBS, Choi Jong Hoon shared an article on March 7, 2016 about how an idol had been revealed to have been caught drunk driving. “Thankfully, I survived because of the favor from [name redacted] hyung,” he said.

Mr. Kim replied, “Jong Hoon had a good experience. You were handcuffed, ran away in front of the police, and must have felt a thrill.” 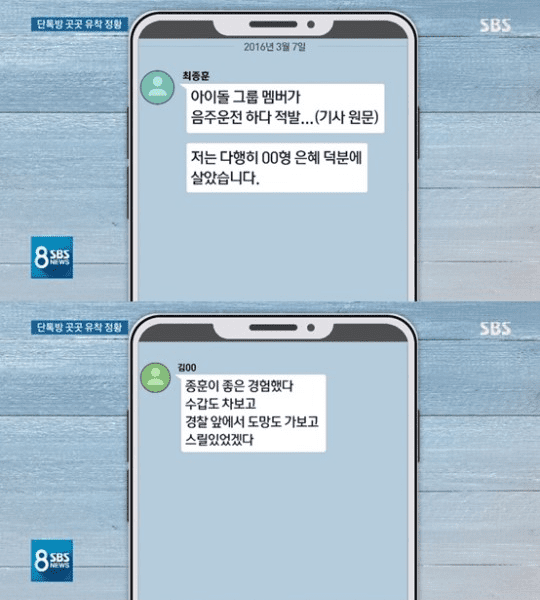 Jung Joon Young said, “Jong Hoon could have made it on to the first page [of the paper] this time,” and Mr. Heo said he could have been the topic of a featured article. Mr. Park added, “He could have become famous.”

Choi Jong Hoon replied, “Why would there be an article about me? It was so quietly taken care of.”

Mr. Kim said, “Quietly? Do you know how far Mr. Yoo went for you?” Mr. Yoo may be CEO Yoo of Yuri Holdings.

An included message from Seungri (separated by a line from the other messages) also said, “Don’t think that it’ll be covered up the next time you drink and drive. [Name redacted] hyung used his own money to keep them from telling.” 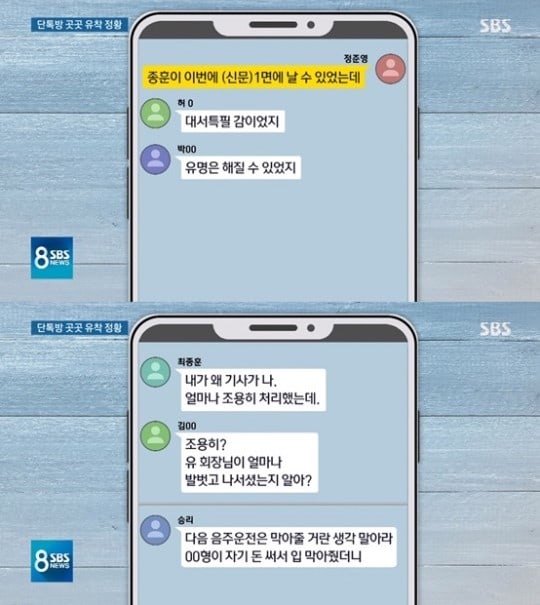 FNC Entertainment previously stated that Choi Jong Hoon will be cooperating with police investigations and will halt all activities for the time being.