On March 14, Kim Byung Chul appeared as a guest on “Happy Together” and answered the question of whether something was going on between him and Yoon Se Ah. He shared, “I personally contact Yoon Se Ah from time to time. I didn’t tell her I’d be on [‘Happy Together’]. I think I’ll get in trouble.”

Kim Byung Chul said, “We filmed a ramyun commercial together. I relied on her for support from our first meeting, and I listened to a lot of her advice. Things worked out well after listening to Yoon Se Ah’s advice,” expressing his gratitude for his fellow co-star on “SKY Castle.”

The actor also revealed, “There was a time when I called Yoon Se Ah to sing to her ‘Happy Birthday,'” surprising the people on set. He explained, “I promised to eat dinner with her for her birthday, but I suddenly had to film at night, so we couldn’t eat together. That’s why I sang the song.”

After hearing Kim Byung Chul’s story, Namgoong Min and Choi Won Young shared that they thought the two actors’ friendship seemed suspicious. When asked, Kim Byung Chul even admitted that there was a moment when he felt his heart flutter around Yoon Se Ah and that he would want to try a romance project with her. He added that something more might have happened between them if people hadn’t pressured the two of them. 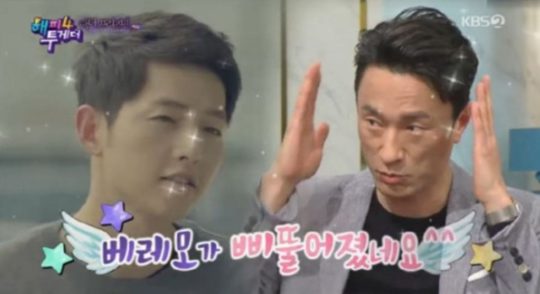 Kim Byung Chul also talked about a special moment with Song Joong Ki while filming “Descendants of the Sun.” He shared, “We were both soldiers together. I was acting as his superior, and during the break, Song Joong Ki slightly fixed my beret. I felt my heart flutter slightly at that.”

Choi Won Young also revealed that there was a group chat for “SKY Castle” that began on the day all nine members got together to film the arguing scene. He shared, “Jung Jun Ho, who’s the oldest in the chat, talks the most. The length of the message is incredible. He tells us a lot of good things.”

The actor also talked about his trauma regarding spoilers. The last time he guested on “Happy Together,” he told the viewers that he’d be jumping into a hole of fire, igniting viewers’ curiosity. He revealed, “Even my wife Shim Lee Young kept asking me for details, so I’ve given false spoilers before.” He joked, “I’m going inside a whirlpool for ‘Doctor Prisoner.'”

Watch the episode of “Happy Together” below!

And start watching “SKY Castle” on Viki with English subtitles.