Kangnam gushed about his girlfriend Lee Sang Hwa in a new interview!

On March 16, Kangnam and Olympic speed skater Lee Sang Hwa confirmed that they were dating. Later that day, Kangnam talked about his relationship in a phone interview with Yonhap News, during which he revealed, “I liked Sang Hwa’s easygoing and kind appearance. We both became interested in each other around the same time and confessed our feelings to one another.”

Kangnam explained, “Despite the fact that Sang Hwa is a gold medalist and a national treasure, she was humble and kind. I thought it was really cool how she treated the people around her so well.”

Kangnam and Lee Sang Hwa became close after appearing together on SBS’s “Law of the Jungle in the Last Indian Ocean,” which aired in September 2018. They also appeared together on TV Chosun’s “One Family Under One Roof” (literal title), where they found out about their marital compatibility from a fortune teller, in November.

Kangnam recalled, “The two of us became close while filming ‘Law of the Jungle’ together and then began to develop feelings after seeing each other at several team dinners afterward. We began dating in the second half of last year, so it’s been about five to six months.”

An online news outlet previously reported that the two stars were in a serious relationship and were dating with marriage in mind. The same report mentioned that the couple went on dates in the city and had taken a trip to Japan together. Kangnam replied, “We were in Japan separately, but we did meet up while we were there. Rather than dating with the goal of marriage, we’re just dating like any other ordinary couple by going to cafés and so on. Our personalities match well, so it’s comfortable when we’re together.”

He went on to share that when reports of their relationship were first published, he had been cautious out of consideration for Lee Sang Hwa, but that she had been cool about it and suggested that they confirm the rumors.

“To be honest, it’s okay for me, but I was worried because Sang Hwa is an athlete,” said Kangnam. “We’ll date well, so I hope that you’ll look kindly upon [our relationship].” 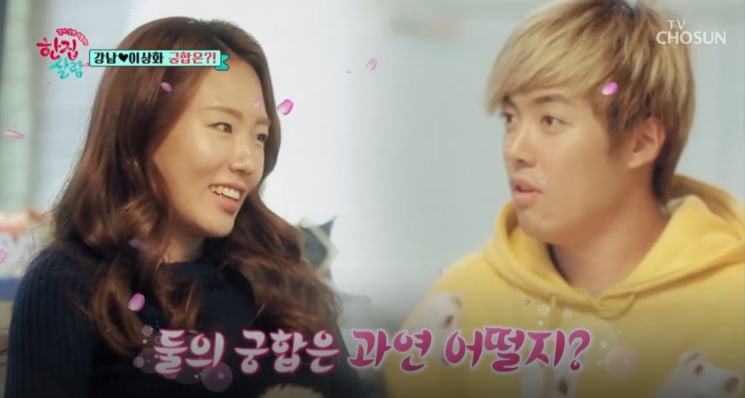 Watch Lee Sang Hwa’s episode of “Master in the House” below!

Kangnam
Lee Sang Hwa
How does this article make you feel?