The previous day, it was revealed that YG Entertainment is currently undergoing a special tax investigation by the National Tax Service. The news was related to an earlier revelation that Yang Hyun Suk and his brother reportedly owned Love Signal, a club under suspicion for tax evasion. However, it was noted in the reports that the investigation will cover a large scope, and not just the finance-related departments, including departments related to performances and marketing.

“Newsdesk” reported on allegations that YG Entertainment and Yang Hyun Suk are under suspicion of tax evasion in relation to overseas performances. According to “Newsdesk,” YG Entertainment has earned approximately 300 billion won (approximately $265.7 million) in sales every year for the past three years, which also includes sales from world tour performances overseas by their label artists.

However, YG is under suspicion of underreporting their overseas concert earnings to the National Tax Service. The apparent method involves YG Entertainment reporting the earnings as their artists’ individual income rather than earnings of the agency. As they would be reporting less earnings, the agency would also be paying less in taxes. 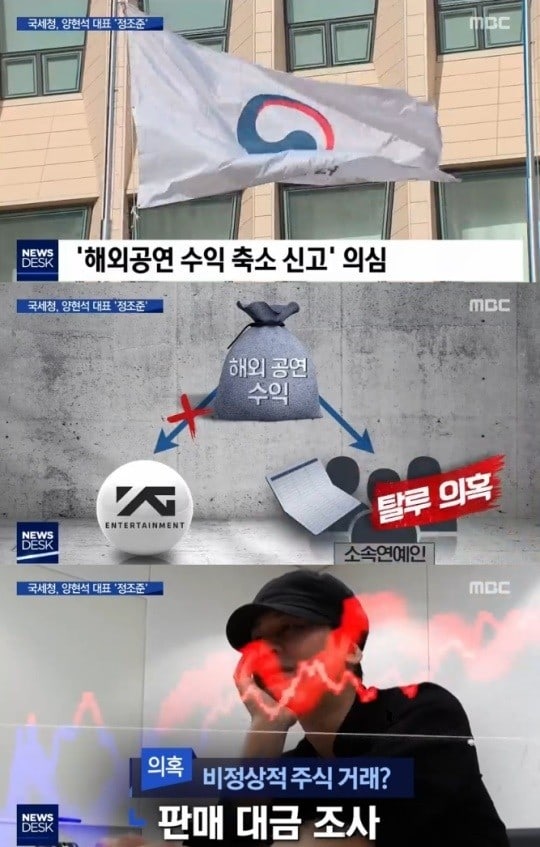 In addition, “Newsdesk” reported that the National Tax Service is focusing specifically on Yang Hyun Suk, the founder of YG Entertainment. According to MBC, the National Tax Service has found what appears to be abnormal stock transactions by Yang Hyun Suk and are currently focusing on tracking the whereabouts of the money from the stock sales. They are also said to be looking into the foreign investment capital Yang Hyun Suk has personally talked about, whether the investors actually exist, where the investments come from, and the nature of the investments.

The investigation into YG Entertainment is of a large scale, with almost 100 investigators reportedly present on scene.