Earlier today, it was reported that Choi Jong Hoon was booked for trying to bribe a police officer who caught him driving under the influence in 2016. SBS has released new details regarding the bribe, along with text messages shared in the group chatroom that included Seungri, Jung Joon Young, and others, that allude to the incident.

According to SBS’s reports, Choi Jong Hoon shared messages in the group chatroom in March 2016 that read, “The chrome hearts [handcuffs] were pretty painful. Anyone who hasn’t worn them before can’t talk,” and “Before he put them on, I offered him 10 million won (approximately $8,850).”

SBS spoke with multiple sources within the police force for more details about the case. According to their report, in February 2016, Choi Jong Hoon was driving under the influence when he saw a police vehicle. He began driving in reverse, and the police officer found this suspicious and immediately stopped him. 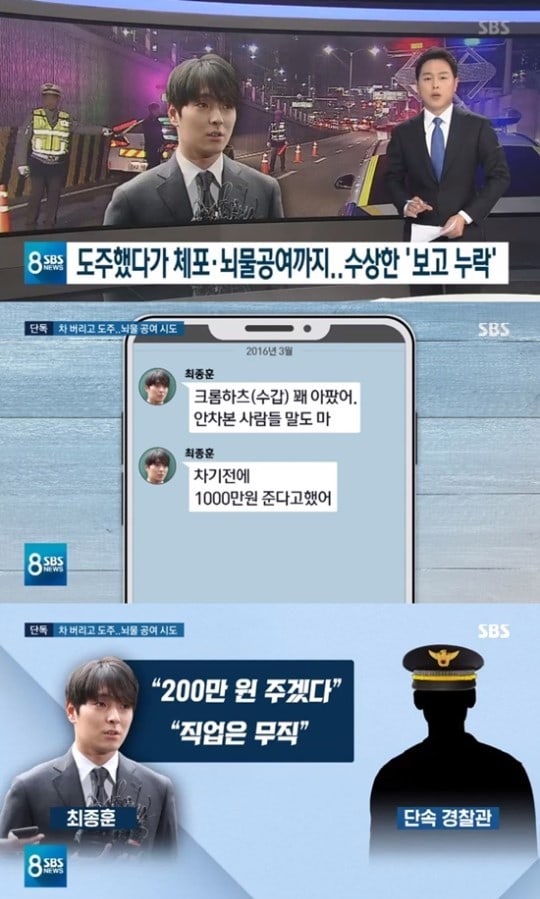 When a public figure is caught driving under the influence, police officers are required to report to a superior officer, and by Choi Jong Hoon claiming he was unemployed, it can be inferred that his incident was not reported as per protocol.

At the time, Choi Jong Hoon’s blood alcohol content was at 0.097 percent, and his license was suspended and he received a fine, but no bribery charges were made. SBS reports that on March 17, the police officer who was offered the bribe was called in and when he confirmed the bribe had been offered, Choi Jong Hoon was booked on charges of attempted bribery of a police officer on March 21, approximately three years and one month after the incident.

FNC Entertainment has since terminated their exclusive contract with Choi Jong Hoon.