MAMAMOO’s Hwasa spoke about her family on SBS’s “We Will Channel You.”

On the March 21 episode, Hwasa appeared as a guest and shared stories from her life as Ahn Hye Jin, rather than the idol Hwasa.

MC Kang Ho Dong said, “I heard that your real name is Ahn Hye Jin, but people from the agency said that [your stage name] Hwasa stands for angry and fierce.”

Hwasa responded, “I was really competitive, starting when I was young. I wanted to get first place when running on field day so I could tell my mom that I got first place. I would get so angry and cry if I got second place. My face would get so red and I couldn’t overcome my anger, but I wanted my parents’ attention.”

She explained, “My family took a big hit during the IMF financial crisis, and my parents were never home because they were always working. My parents were never there during the days when parents could come to the classroom. I considered what would make my parents come to school and thought that I could tell my parents to come to school arts festivals or field days. When I told my mom that I’d be performing, for instance, she would stop by briefly.”

Hwasa then shared the painful story of her uncle. “This is something I’m talking about for the first time [on TV],” said the MAMAMOO member. “My family was really poor, but my uncle helped me with my living expenses and everything while I lived in Seoul. My uncle wasn’t married and treated me as if I were his daughter. He loved me so much to the point where he just looked at me from the moment he woke up to when he went to sleep. He’s someone who gave me so much love.”

She continued, “There was a time when I got into a minor car accident on the way to an event with my members. I don’t know how, but he was the very first person to find out and called my dad saying, ‘I think Hye Jin got into a car accident. Give her a call.’ My uncle thought that he might be bothering me [and didn’t call me], but my dad told me that my uncle was worried the most and asked me to call him. I replied, ‘Dad, I’m really okay. Don’t worry. It was nothing big.'”

“Not long after that, my uncle suddenly passed away in a car accident,” said Hwasa. “Suddenly losing someone who was valuable to me was really hard. I went through an emotionally difficult time for a while. This happened in September 2017. There’s an unforgettable moment that happened. I still hope for my uncle to appear in my dreams although he hasn’t yet. One day, I was crying in my room and it happened to be a really cloudy day. It was dark inside the house and I felt so frustrated because I wanted to talk with my uncle but couldn’t.” 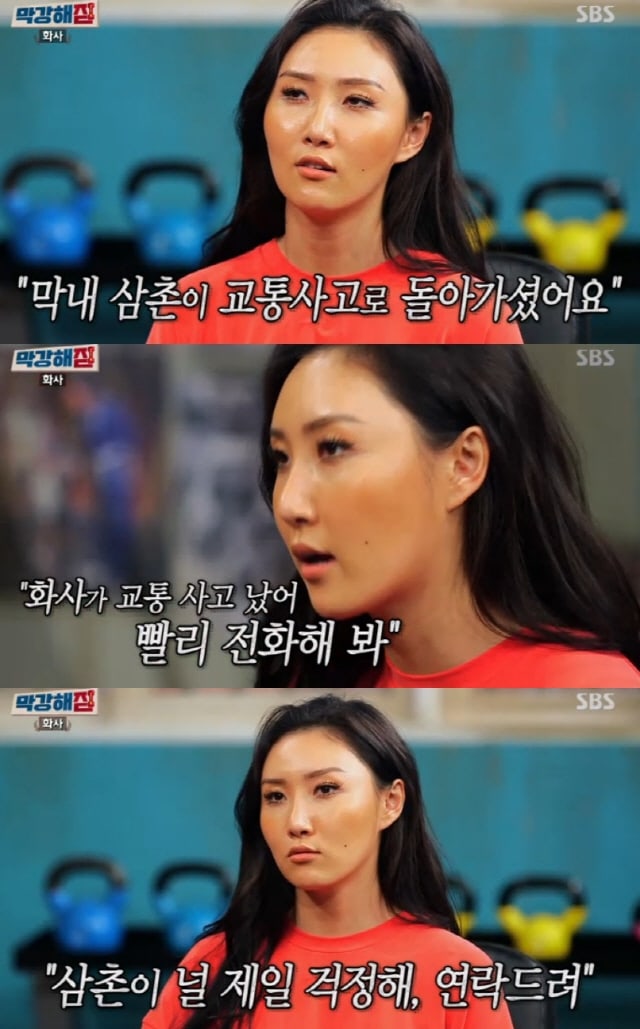 She continued, “I called out, ‘Uncle!’ and my room suddenly became really bright. My house had never been brighter. Sunlight suddenly shone through. I wondered if my uncle was there and it felt as if he were there. I thought that I needed to tell him everything I wanted to say and said whatever I could think of while crying. I told him that I missed him, and then it became dark again. I think that I talked with my uncle during that moment and want to believe that he was there.”

After MC Yang Se Hyung sympathized with her and shared a similar story, Hwasa continued speaking about her uncle. She said, “I was sleeping in my uncle’s room [on the day of his funeral,] but stepped out because it felt stuffy. There’s a small ditch outside of my grandma’s house and a tiny cat walked towards me next to the ditch. I wondered what this was and it was so cute. No one believes this, but just then, an eagle grabbed the cat and flew away. One of my managers was next to me and only the two of us saw this. It happened in a flash.”

She added, “There was another cat there, but I was scared that the eagle might take this one too. My grandma then saw the cat and told me that my uncle made a home and gave food to the cat so that it wouldn’t be captured. This happened to be the cat that my uncle had been taking care of. So I asked my manager to raise the cat and she still raises it to this day. I think about my uncle when I see the cat.”

MAMAMOO
Hwasa
We Will Channel You
How does this article make you feel?