The two actors are starring together in the upcoming tvN drama “Confession,” a crime investigation drama about people attempting to uncover veiled truths that are hidden behind the law of double jeopardy. 2PM’s Junho will be playing Choi Do Hyun, a man who ends up becoming a lawyer in the hopes of saving his convicted father from the death penalty, while Yoo Jae Myung will play Ki Choon Ho, a former detective who refuses to accept a verdict from five years earlier.

Early in the drama, the two men will face off as opponents in a case where Choi Do Hyun insists on the defendant’s innocence and Ki Choon Ho believes firmly in the defendant’s guilt. However, after investigating the case further and learning that there is more to the truth than what meets the eye—including a series of seemingly related incidents—the two men end up joining forces and working together to bring the truth to light.

On March 22, “Confession” unveiled new stills of its two charismatic leads. The photos show the two men in deep discussion, looking serious as they talk about a case. 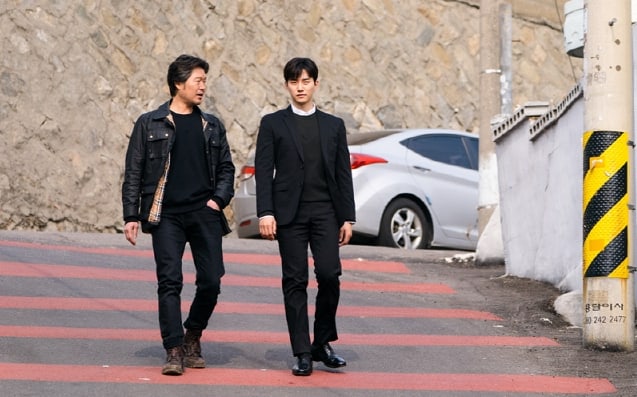 Junho expressed his gratitude to Yoo Jae Myung for helping him feel relaxed and right at home during filming, commenting, “The atmosphere on set is comfortable and uninhibited.” He also expressed his faith in the veteran actor, remarking, “I’m depending on Yoo Jae Myung’s strength to take the lead in our scenes together.”

Meanwhile, Yoo Jae Myung praised Junho’s personality and raved about their teamwork, enthusing, “Lee Junho and I get along so well together. He’s so mature that I haven’t noticed our age difference at all. He feels like an old friend with whom I could get together for a drink at any time.”

“Confession” will premiere on March 23 at 9 p.m. KST. In the meantime, check out the highlight reel for the upcoming drama here!