“Persona” is a new short film project that will feature IU in four different stories told by four different directors: Im Pil Sung, Lee Kyung Mi, Kim Jong Kwan, and Jeon Go Woon. IU will play an entirely different character in each of the four films, which were all inspired by the actress. 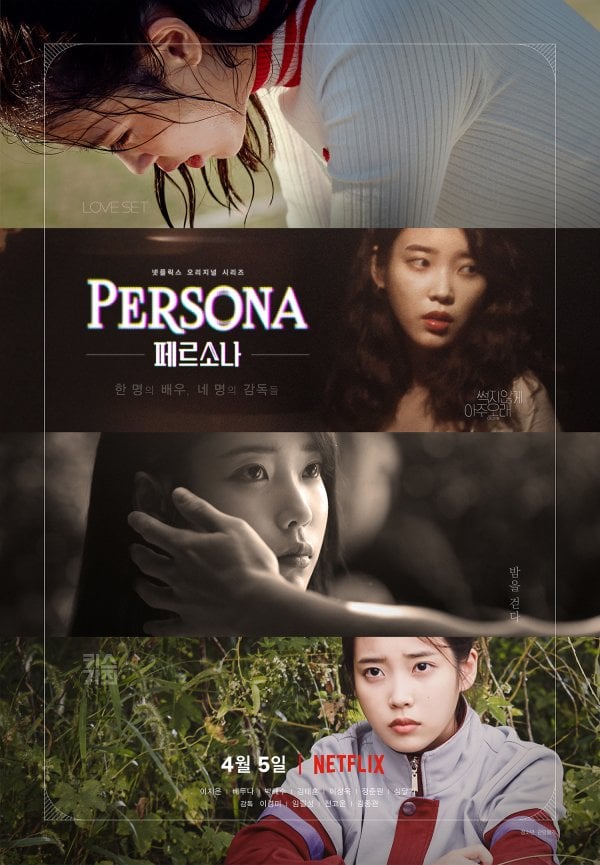 On March 22, “Persona” revealed its official poster and shared a new sneak peek of the upcoming short film collection. The preview begins with Lee Kyung Mi’s “Love Set,” in which IU plays a heated game of tennis with her father’s girlfriend (played by Bae Doona). The girlfriend tells her before the match, “If I win, you end things with your dad,” and IU’s character later pleads, “Dad, don’t marry that woman.”

The second film, Im Pil Sung’s “Collector,” stars IU as a mysterious young woman with a secret. A man says in voice-over, “From the very beginning, you were special, and you had a lot of secrets.” IU’s character then comments dreamily, “When I let my body flow with the waves, it felt like I had become sugar. I want to be freer and eternal.”

The third film, Jeon Go Woon’s “Kiss Burn,” stars IU as a spirited high school student who decides to help her friend get revenge. The preview begins with IU’s character calling her friend and saying worriedly, “Something happened to you, right? I’m on my way.” However, once they meet up, IU’s character asks, “What is this? Allergies?” and her friend happily tells her, “Hickeys.” IU’s character later declares, “This won’t do. Time for revenge,” while insisting to her friend defensively, “Of course I know. I know that you get hickeys from kissing.”

The fourth and final film, Kim Jong Kwan’s “Walking at Night,” tells the story of former lovers who meet in their dreams and share the things they couldn’t say in real life. IU’s character remarks sadly, “Dreams and death… they don’t have a set path. You don’t go anywhere, and it will all be forgotten. We’re here, but no one remembers.”

“Persona” will be released on Netflix on April 5. In the meantime, check out the preview below!

IU
Persona
How does this article make you feel?