Gummy appeared as a guest on the March 22 broadcast of KBS 2TV’s “Yoo Hee Yeol’s Sketchbook” to introduce her new song.

Yoo Hee Yeol, who last saw Gummy before her marriage to Jo Jung Suk, asked her how she’s doing, and she said, “I’m happy.” Gummy talked about doing a tour in Korea right after her marriage, and Yoo Hee Yeol joked to the audience, “Basically, she was desperate for money.”

The singer then introduced her new song, her first in nearly two years, called “Alone.” Yoo Hee Yeol expressed his surprise at the title since she’s a happy newlywed, and Gummy replied, “That’s true, but it’s the people listening that are the protagonists of the song, not me. The song is about feeling lonely and alone even while with someone else.”

Asked how Jo Jung Suk reacted to the new song, Gummy said, “He told me that from the point of view of fans, they would be looking forward to a ballad, and that he also feels the same way.”

Yoo Hee Yeol, impressed, said to the audience, “You understand now, right?” and told Gummy that she and Jo Jung Suk are great together. 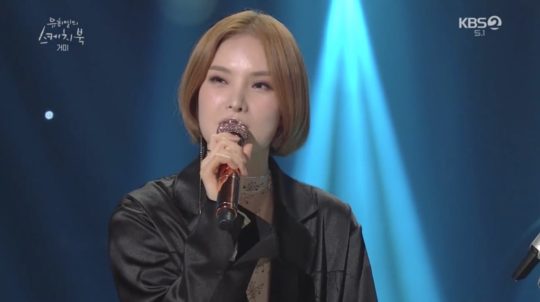 Gummy
Sketchbook
Jo Jung Suk
How does this article make you feel?