DreamCatcher held their first ever solo concert in Singapore this past Friday as part of their “Invitation From Nightmare City” Asia tour. The concert was organized by MyMusicTaste, a crowd-sourcing platform for fans to request artists to come tour in their city.

As an InSomnia myself, I was surprised to see the size and passion of the DreamCatcher fan base in this tiny city-state. InSomnia were out in full force around the Gateway Theatre since early Friday evening, giving each other “fan support” items as well as treating each other to cover dance performances of their favorite queens of metal.

The concert’s first stanza opened with their urban fantasy masterpiece “What,” followed by “Sleepwalking,” and finally “Chase Me” – the song that completed their metamorphosis from MINX to DreamCatcher.

As the night progressed, fans were treated to live performances of all of their favorite hits, including “Good Night,” “You and I,” “Fly High,” “Over the Sky,” and their latest comeback, “PIRI“. 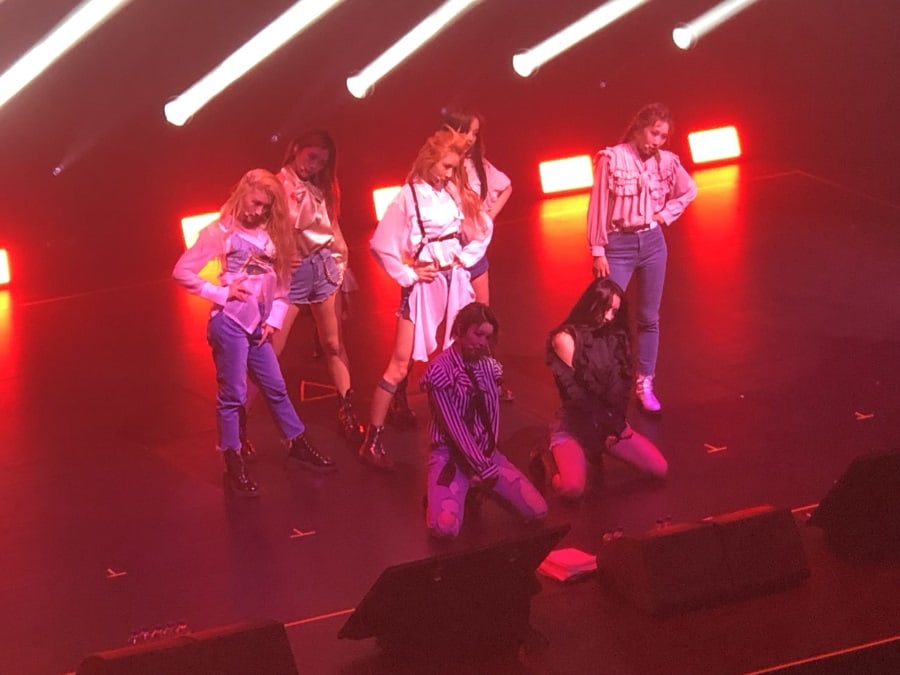 Besides performing their own music, DreamCatcher also had a special segment where they split into three sub-units to cover songs they chose themselves. SuA and Yoohyeon started with a feminine rendition of Charlie Puth’s “Attention.” Next, Siyeon, Handong and Gahyeon performed a Justin Bieber medley of “Boyfriend” and “As Long As You Love Me,” where we got to hear Handong rap for the first time. Finally, JiU and Dami closed off with a self-proclaimed “cutie” version of Flo Rida’s “I Don’t Like It, I Love It.”

Throughout the night, it was amazing to see the effortless transformation between the two sides of DreamCatcher:

On one side, you have DreamCatcher the performers, with their meticulously crafted goth/alternative concept, precise choreography, and powerful vocals.

On the other side, you have DreamCatcher the idols, who are just seven playful girls that genuinely love to engage with fans and mess around on stage during intermissions, even as the designated event translator struggled throughout the night to keep up with them. The intermissions were especially amusing to watch, as fans got to witness members skip and prance around the stage like schoolgirls and try to act sexy in a goofy way (yes it’s possible). Fans also got to see Handong and JiU try their best to introduce “PIRI” in a cute way (they lost a game and that was the punishment). Certainly not what you expect from vampire heavy metal goth princesses.

There was one incident that illustrated this dichotomy perfectly. As the members lined up for a special performance of “PIRI,” they realized that the intro was longer than usual. Bored waiting in line, many members broke character and started playing around – some waving to fans, some breaking into an impromptu dance to entertain the crowd. As the song was about to start, the members quickly reverted to their serious onstage personas. But, no! The music suddenly stopped due to a technical fault. The members reacted swiftly, switching to their playful selves and singing a capella with the audience.

The concert concluded with a final intermission where all the members talked about their love for Singapore and wanting to come back again. Handong was moved to tears as fans surprised her with an unprompted birthday song.

Closing off the night was a powerful and energetic performance of “Full Moon,” a fan-favorite track released last year to commemorate the group’s one year anniversary.

Special thanks to MyMusicTaste for inviting us down to the event!

Soompi Spotlight
Dreamcatcher
How does this article make you feel?