On March 24 at 6 p.m. KST, the singer dropped her newest solo single “Four Seasons,” a track about how the ups and downs of love are like the four seasons. The single includes b-side “Blue,” and marks her first domestic solo release since “Something New” in June 2018.

Within just a few hours of its release, she quickly rose to the top of all seven major realtime charts. As of 11:30 p.m. KST on March 24, she is No. 1 on the realtime charts of Melon, Genie, Bugs, Mnet, Naver, Soribada, and Flo. 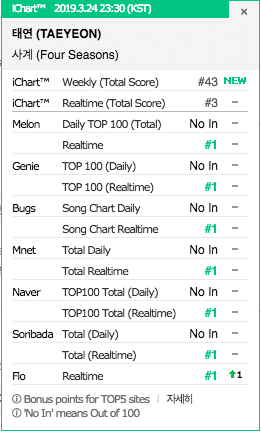 Taeyeon previously pre-released the music video for “Four Seasons” on March 22 ahead of the whole single, which you can check out here.