A former “Produce 101” contestant who debuted as a solo artist showcased her vocal abilities on the latest episode of “The King of Mask Singer.”

In the third round, she competed against contestant Gulliver and sang IZI’s “Emergency Room” (literal title) while Gulliver sang Lovelyz’s “Destiny.”

After removing her mask, Kim Joo Na said, “It’s been about three years since I’ve stood on a big stage like this. It feels new, and I felt so happy to let you hear my singing.”

When asked about the panelists’ reactions to her singing, Kim Joo Na became emotional as she tearfully said, “To be honest, when I was performing my final song ‘Emergency Room,’ [the panelists] gave such good comments. I didn’t know if I was worthy of hearing such words. Thank you.”

Giving viewers an update on her current promotions, Kim Joo Na revealed, “I left my former agency and have been making music with a songwriting team. Please listen to it a lot and look for it.” Many of the panelists gave her encouraging words and wished her the best for her future promotions. 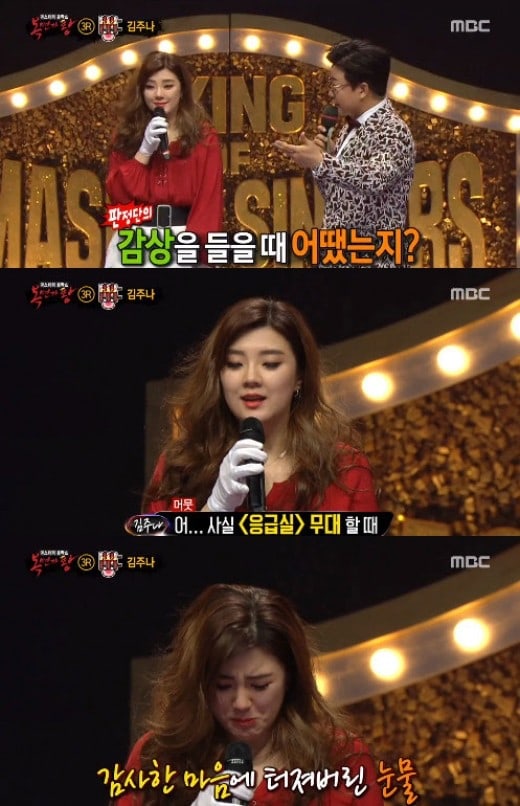 After the broadcast, Kim Juna posted photos of her mask, a video of her performance, and a screenshot of her name on realtime trending searches on Naver.

The singer wrote, “I sincerely thank the best program ‘The King of Mask Singer,’ which gave me such a good opportunity. It was a meaningful stage where I could show the public a great performance in an honest way without bias after a long period of three years. I want to sincerely thank everyone who waited and supported me. I will work harder to repay you with better music and various promotions to repay you for your interest and love. I’m working hard on my music, so please love Joo Na’s music a lot. Thank you.”

She added the hashtags, “The King of Mask Singer,” “Sausage Rice Cake Sausage Rice Cake was me Kim Joo Na,” “I love all of you who cheered for me,” I’ll work harder from here on out,” and “Cheers.”

Kim Joo Na
The King of Mask Singer
How does this article make you feel?