Namgoong Min Is Unexpectedly Handcuffed And Detained In “Doctor Prisoner”

Ahead of the March 27 broadcast for “Doctor Prisoner,” KBS2 released stills of Namgoong Min in handcuffs and being detained, sparking curiosity among the viewers.

“Doctor Prisoner” is about a skilled doctor who is forced to resign from his position at a hospital and takes a job at the medical ward of a prison in order to forge connections with the powerful, wealthy prisoners and enact his revenge.

In the released stills, Na Yi Jae (played by Namgoong Min) is handcuffed and led inside the prison by the prison wardens and undercover detectives. Na Yi Jae appears devastated and resigned to his fate, and Sun Min Sik (played by Kim Byung Chul) boldly passes by in the background. 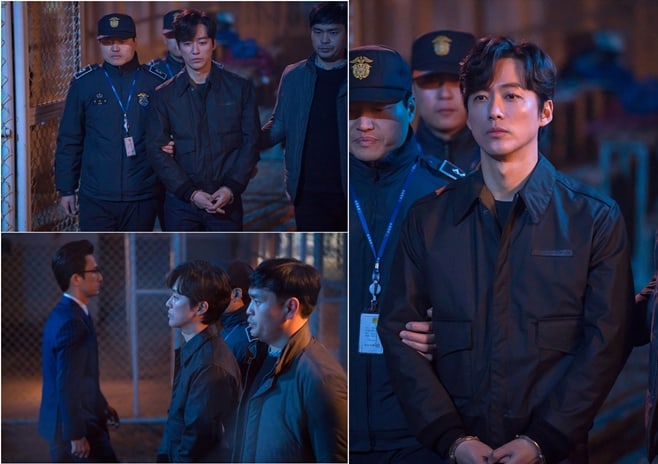 Previously in episode four, Na Yi Je attacked Sun Min Sik with documents proving his corruption at Ha Eun Hospital. All Na Yi Je wanted was to be acknowledged as the new medical director in front of the medical staff.

Cornered, Sun Min Sik was about to head to a dinner party when his original successor Choi Dong Hoon (played by Chae Dong Hyun) appeared, revealing that he had been kidnapped. After meeting with his successor, Sun Min Sik was convinced that Na Yi Je was responsible for the convoy accident. Sun Min Sik then made his counterattack, putting Na Yi Je on the spot by asking, “Lee Jae Hwan’s accident, you planned it, right?”

Viewers are curious to find out why Sun Min Sik has pegged Na Yi Je as the true culprit, although it had already been revealed that Mo Yi Ra (played by Jin Hee Kyung) was the one who plotted Lee Jae Hwan’s (played by Park Eun Suk) accident, and how he knew Kim Sang Choon (played by Kang Shin Il) and Tae Choon Ho (played by Jang Joon Nyung) were helping Na Yi Jae.

“Doctor Prisoner” airs every Wednesday and Thursday at 10 p.m. KST. Watch the latest episode below!