SBS’s “8 O’Clock News” has reported another instance of Burning Sun’s alleged collusive ties with the police.

On the March 27 broadcast of the show, an informant, Ms. Kim, spoke with SBS about possibly being drugged at Burning Sun and being accused of being a violent assailant by the Gangnam Police Station.

According to SBS, Ms. Kim testified that after visiting Burning Sun in December, she seemed to have been drugged by someone. She revealed that soon after making her way into the club, she was given a glass of champagne by a Chinese man. She stated, “After drinking a glass of champagne, I opened my eyes and I was in the police station. My drinking limit is one or two bottles, so something was weird.”

At the police station, Ms. Kim was told that she had been arrested for assaulting a club MD (promoter) at Burning Sun.

She stated, “I didn’t remember anything, and the police kept saying that there was CCTV footage of me pushing people. I knelt and begged in front of the victim (club MD), but he kept saying it was no use.”

Ms. Kim suspected that she had been sexually abused because her physical condition was different from usual, but she was unable to receive proper hospital treatment because she felt distraught. According to Ms. Kim, her entire body had been covered in bruises. She said, “You know when you grab someone really firmly, and you get bruises? Round ones. What I regret the most is not going to the hospital that day.”

Ms. Kim’s father, who was surprised by the news that his daughter had suddenly become a violent assailant, also revealed, “I asked [the club promoter] if he had grabbed my daughter by the collar even just once, but the MD said with a straight face that Burning Sun is a club where you get fired even if your hands just momentarily brush against the collar of your guests.”

Ms. Kim requested a drug test from the police as she couldn’t remember anything despite drinking much less than usual, but the police officer in charge rushed to Kim and said, “This isn’t it. This is weird.” He then took the drug test kit and threw it away. Kim eventually paid a fine of 1 million won (approximately $879) after the police stated that there was clear evidence she was a perpetrator of violence, and she was unable to question them.

When SBS later questioned the police in charge about this, he stated, “When I said it’s strange, I was talking about the drug test kit.” The police officer also explained that Ms. Kim had tested negative for drugs after he proceeded with investigations with a different drug test kit. Although SBS tried to search for documents confirming his statements, the investigation report only stated that the CCTV footage from Burning Sun had been deleted, and SBS was unable to find any mentions of drug testing from the case.

Kim has since demanded a re-investigation of the case and has sued four police officers for dereliction of duty. 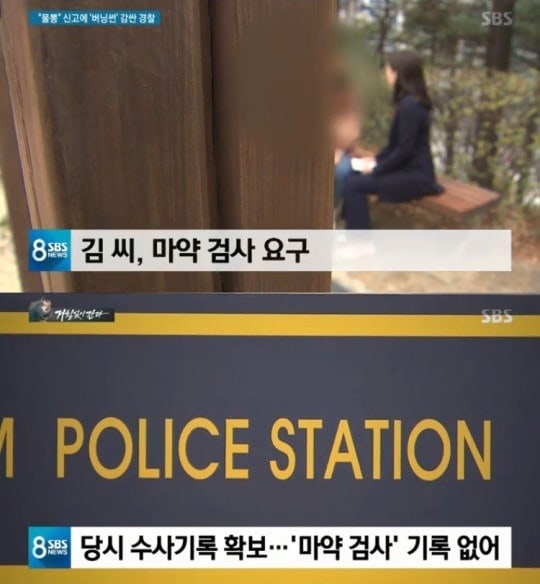