A report by Yonhap News from the evening of March 28 states that the Seoul Metropolitan Police Agency has confirmed the existence of 23 chatrooms so far where illegally filmed videos were shared by Jung Joon Young, Seungri, Choi Jong Hoon, and more.

According to the police, there were 16 participants in chatrooms (including group chatrooms and one-on-one chatrooms) where videos and photos were shared. Out of these participants, there are seven including Jung Joon Young, Seungri, and Choi Jong Hoon who uploaded photos or videos.

In regards to why some of the participants of the chatrooms haven’t been booked, the police explained, “They are not booked for just simply looking at [the photos or videos].”

“Newsdesk” reports that the chatroom conversations were full of messages that disparaged women, and even included discussion of the possibility of using illegally filmed video as blackmail.

There was also model L, businessmen such as former Yuri Holdings CEO Yoo In Suk, two Burning Sun MDs (merchandisers or promoters), and a friend of Jung Joon Young.

When reached out to for a comment, a representative of singer K said that they do remember being in a chatroom with Jung Joon Young, but not the sharing of illegal photos.

There are said to be seven chatrooms where hidden camera videos were shared, which had as few as three to four people or as many as six to seven people.

The police have found in their investigation that after videos were shared in the chatrooms, the participants would talk about them as though bragging. In addition, Seungri’s acquaintance Mr. Kim filmed a sexual video of a victim who owed him a debt. He said, “Should I release this video if she doesn’t pay up?” and shared the video in a chatroom.

Police have found that he filmed women in locations including a hotel in Taiwan, his apartment, a restaurant in Gangnam, an adult entertainment establishment, and in an airplane. The videos were also shared at various times of the day, including the middle of the night and the afternoon.

Most of the videos are less than 10 seconds long, and were taken without the woman’s awareness. It’s reported that he was caught by a woman he’d filmed in his home in 2015 and he deleted the footage. 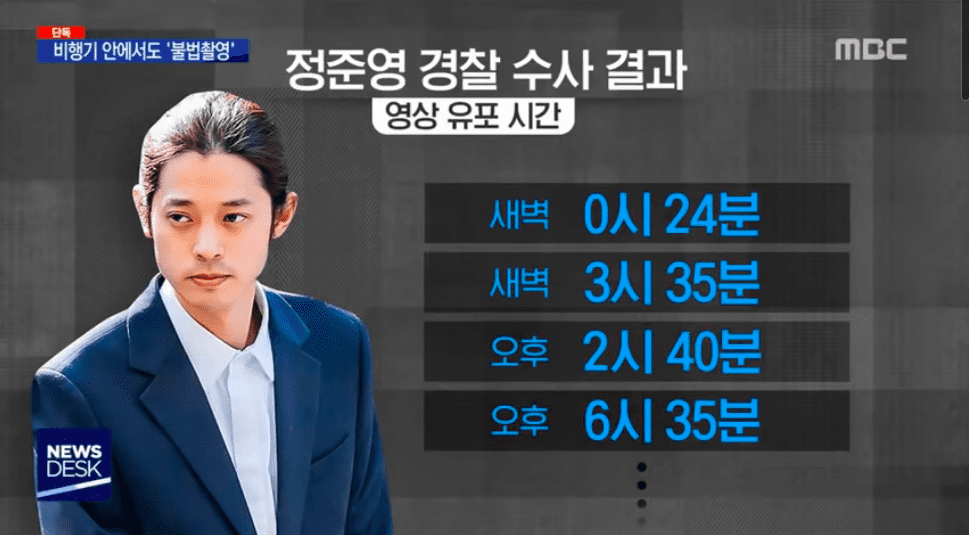 Jung Joon Young was arrested on March 21 and is currently being held at a detention center. He has been charged with 11 instances of sharing illegally taken footage.