The drama is about two people (played by Park Bo Young and Ahn Hyo Seop) who are revived by a soul-reviving marble called “Abyss.” They find that they’ve returned to life with completely new faces and set out to find their killers.

Ahn Hyo Seop’s character Cha Min was a wealthy chaebol who was perfect in every aspect except for an unfortunate face, described as a “visual terror.” After his death, however, he finds that he’s back looking better than ever.

Working alongside Go Se Yeon (Park Bo Young), Cha Min pursues the truth behind what happened to him. 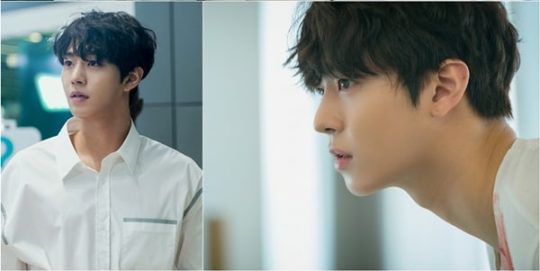 The new stills revealed on March 29 show Ahn Hyo Seop on his first day of filming. Ahn Hyo Seop said, “I was so nervous and excited for my first day. I was able to get into a comfortable and fun filming atmosphere thanks to the great director Yoo Jae Won as well as the staff and cast, including Park Bo Young and Lee Sung Jae.”

The actor added, “I already feel good [about the drama]. I’m so excited for everyone to see Cha Min, so please wait until May, when ‘Abyss’ goes on-air.”

“Abyss” is set to air in May, following the conclusion of “He Is Psychometric.”