Girls’ Generation’s Tiffany Names The Grammys As Her Future Goal

Girls’ Generation’s Tiffany chatted about her future goals, gratitude to fans, and more!

On the March 29 episode of the MBC FM4U radio show “Bae Chul Soo’s Music Camp,” Tiffany appeared as a guest. “I’m grateful to my fans who have waited,” she said. “Whenever I come to Korea, it’s a place that makes me think about my starting point as an artist. I’ll try to come see my fans whenever I release music.”

Tiffany recently won the Best Solo Breakout award at the 2019 iHeart Radio Music Awards. “I was surprised to even have been nominated, but I was truly surprised that I won,” Tiffany said. “I was happy to receive it.”

“Fans submitted more than 20 million votes,” she continued. “I want to say once again to my fans that I’m so grateful. It’s very meaningful because it’s the result of fans who love K-pop all working together to vote.”

“You can only receive an award for being a rookie artist once,” she said. “I always feel like a rookie, so I was happy.” She also shared her love for her fellow Girls’ Generation members. “I’m grateful to the members of Girls’ Generation, who are always believing in me, cheering me on, and supporting me.” 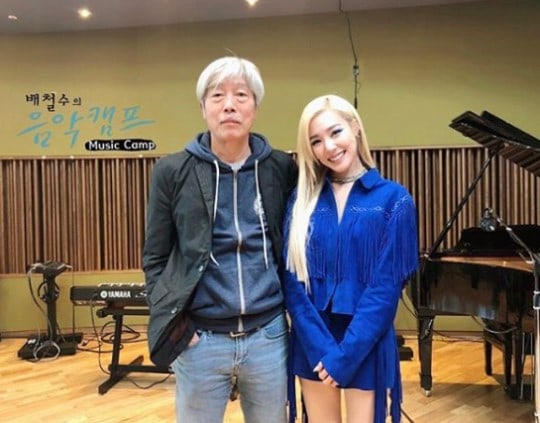 When asked about her goal as a musician, Tiffany named winning at the Grammy awards. “When we started Girls’ Generation, I said I wanted to be a Daesang-winning artist,” she explained. A Daesang is a grand prize at one of Korea’s year-end music award ceremonies.

“This is my first starting point in the United States,” she said. “I hope you will give me a lot of support for the new challenges I’m taking on.”

Tiffany’s new EP “Lips on Lips” went platinum in only a week, and she recently thanked fans for the achievement.