The cast and staff of MBC’s “My Little Television 2” shared their thoughts on the new show.

PD Park Jin Kyung from “My Little Television” will continue directing while PD Kwon Hae Bom has newly joined the program. Kim Gura will appear as a fixed cast member while An Yu Jin has been confirmed as the new MC.

An Yu Jin will take the place of voice actor Seo Yu Ri to help the live broadcast and the new fundraising system. She’ll transform into the youngest daughter of the homeowner, whose age, name, and job are all a mystery. The IZ*ONE member will assist people who are invited to the home by her father and monitor the real-time fundraising situation in every room.

She continued, “Youngest daughter Yu Jin has to help many visitors, so I think she’ll be a bright, fun, and enthusiastic person. Since IZ*ONE’s An Yu Jin is still a rookie, I’ll show [viewers] my efforts to work hard and develop more.”

PD Park Jin Kyung is known for his broad knowledge of idols. Regarding his decision of choosing An Yu Jin, he said, “Just like how there’s the phrase ‘the second phase of life,’ it felt like the idol’s second life even though it hasn’t been a long time since she’s debuted. The ability to react quickly is important on our show. The guinea pig PD was popular because of his ability to react quickly rather than his looks. An Yu Jin’s charms will slowly be revealed as the broadcasts continue.”

After hearing his praise, An Yu Jin replied with a laugh, “I avidly watched ‘My Little Television,’ and I felt so happy and excited that I would be appearing on this program. I was nervous on the first day of filming. I was nervous because it was without the IZ*ONE members, but I was able to do a good job thanks to the help of the seniors. I’ll become the youngest daughter who works hard.” 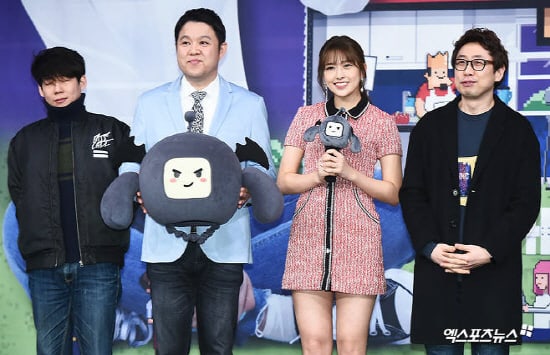 Online viewers reacted wildly when An Yu Jin appeared onscreen during the first live broadcast. Whenever she appeared, the number of viewers suddenly increased, proving her buzz-worthiness.

In addition to MC An Yu Jin, there are other changes on “My Little Television 2” such as the removal of the ranking system and the implementation of a donation system. PD Park Jin Kyung explained, “That was the main reason why we got rid of the competitive system. When a fandom gets involved, [that program] gets No. 1 no matter what kind of show it is. The fun of the broadcast and the rankings were not proportional. Kim Gura’s ranking was an average of 4.5. Newly added An Yu Jin’s role is to actively participate in rooms to help her father, who’s called the owner, raise donations.”

On using Twitch, he continued, “There are YouTube and Kakao, but [Twitch] is currently recording growth and it was determined internally that it has a useful format for directing. There are tens of thousands of participants, so we can communicate at once. We can also use additional features.”

PD Park Jin Kyung added, “We were able to return after two years, and ‘My Little Television 2’ was a good card among many cards that I thought would be good to use in 2019. I’ll try to have fun creating it. ‘My Little Television’ was already enjoyable, so I’ll work to make the editing fun as well. If the buzz dies down, I’ll wrap up filming right away.”

“My Little Television 2” is the first-ever combination of a variety show and an internet show. It will use a voice chatting system to communicate both ways and gather all of the money sent to viewers to donate to people in need.

In the meantime, check out the latest episode of the first season below!