C9 Entertainment has issued a statement regarding Kim Se Hoon, who was previously announced as a member of the agency’s upcoming boy group, currently known as C9BOYZ.

The agency had previously stated in a first notice that they were looking into a controversy surrounding the member to determine the truth. This followed posts made online about his alleged actions.

On the evening of April 2, C9 Entertainment issued the following statement:

Hello. This is C9 Entertainment.
This is our second statement regarding Kim Se Hoon, who was announced as the fourth member of C9BOYZ (tentative name).

After looking into the matter, we confirmed that until his second year of middle school, Kim Se Hoon committed wrong actions that are inappropriate for a student. However, it is true that a considerable amount of the content [of the accusations] was false, exaggerated, or distorted.

In regards to what is stated above, we contacted his homeroom teacher at the time, who confirmed that Kim Se Hoon was not a unilateral perpetrator of school violence. They also expressed their sadness as they said the events at the time were not something worthy of becoming such a large issue.

When Kim Se Hoon entered the third year of middle school, he joined a dance club and began to have dreams related to dance. After he became a trainee at our agency, he has been doing his best to achieve his dreams. He is known among his fellow trainees as well as senior and junior artists for his bright personality and has been a good example for others, and that is why he was chosen to debut with the group.

After the controversy arose, we talked with Kim Se Hoon as well as people involved such as his parents, acquaintances, and the debut group members. During that time, Kim Se Hoon deeply reflected on his wrong behavior from the second year of middle school, and because he was concerned about causing harm to the other members, he asked that he be excluded from C9BOYZ (tentative name).

We are planning to exclude Kim Se Hoon from C9BOYZ. However, we will continue to work together with Kim Se Hoon so that he can try to achieve his dreams. We will do our best for Kim Se Hoon’s continued improvement, including in terms of his character as well as his skills.

In the future, we plan to take legal action by filing civil and criminal suits if there are more cases of the spreading of falsehoods in relation to Kim Se Hoon. He is a student in his third year of high school who is trying to achieve his dream and it is still far too early for him to give up on it. 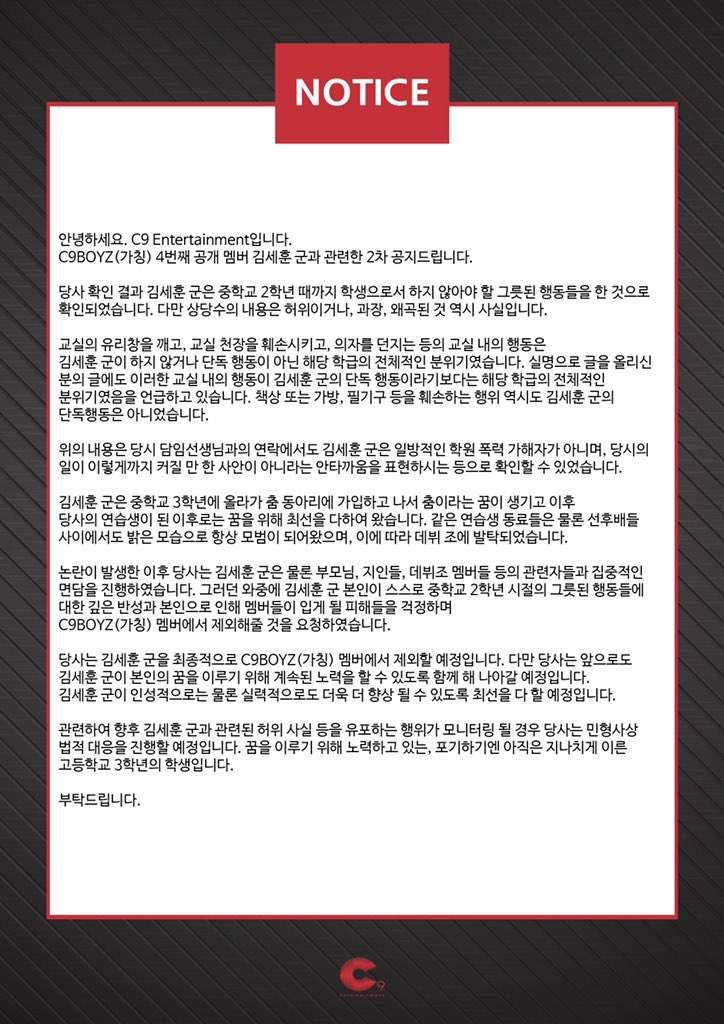 C9BOYZ
Kim Se Hoon
How does this article make you feel?