Park Ji Hoon talked about his solo promotions and the support he’s gotten from Wanna One members on SBS’s “Night of Real Entertainment.”

Park Ji Hoon said, “I feel nervous and excited, but I feel more excited,” before performing his solo track “L.O.V.E” at his debut showcase, which sold out in just one minute.

During his interview, the singer talked about his tears at Wanna One’s final concert in January. “I didn’t want to cry, but it wasn’t easy,” said Park Ji Hoon. “When I thought that this was the last song, I started to cry. It was a sadness that I couldn’t explain.”

About promoting as Wanna One, he added, “I wonder if it’ll be possible for me to receive that much love in my life again. It’s an honorable memory, and I miss it a lot.”

“The Wanna One members cheered me on for my solo promotions,” continued the singer. “Yoon Ji Sung called me, and Bae Jin Young sent me a wreath. Since there are many members and they’re all busy with their individual schedules, not everyone contacted me. I trust that they’re all sending me their silent support.”

Park Ji Hoon is well-known as the creator of the popular phrase “Save you in my heart,” which earned him the nickname “nation’s saving boy.” He chose actor Ma Dong Seok‘s version of the phrase as the most memorable one before showing viewers the original. He commented, “It must be difficult for seniors because I made something unnecessary like this. But it’s an honor for me.”

He concluded, “Instead of focusing on the results, I want to remain as artist who promotes continuously.” 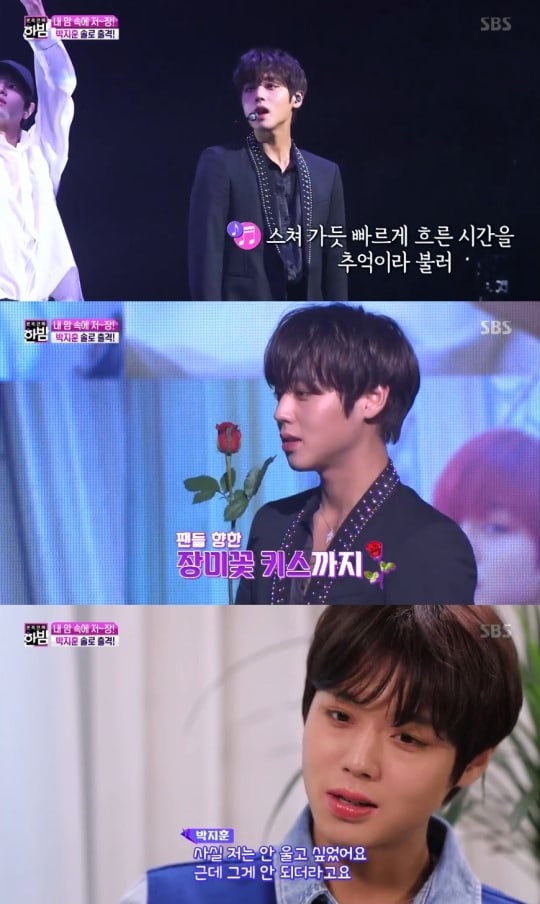 Check out a full episode of “Night of Real Entertainment” below!

Night of Real Entertainment
Park Ji Hoon
How does this article make you feel?