“Her Private Life” is a romantic comedy that tells the story of Sung Duk Mi (Park Min Young), a professional gallery curator who lives a secret life as an idol fangirl, and her prickly boss Ryan (Kim Jae Wook).

During the press conference, the actors discussed about their personal experiences with being fans themselves, previous dramas they worked on, and the chemistry between the cast. 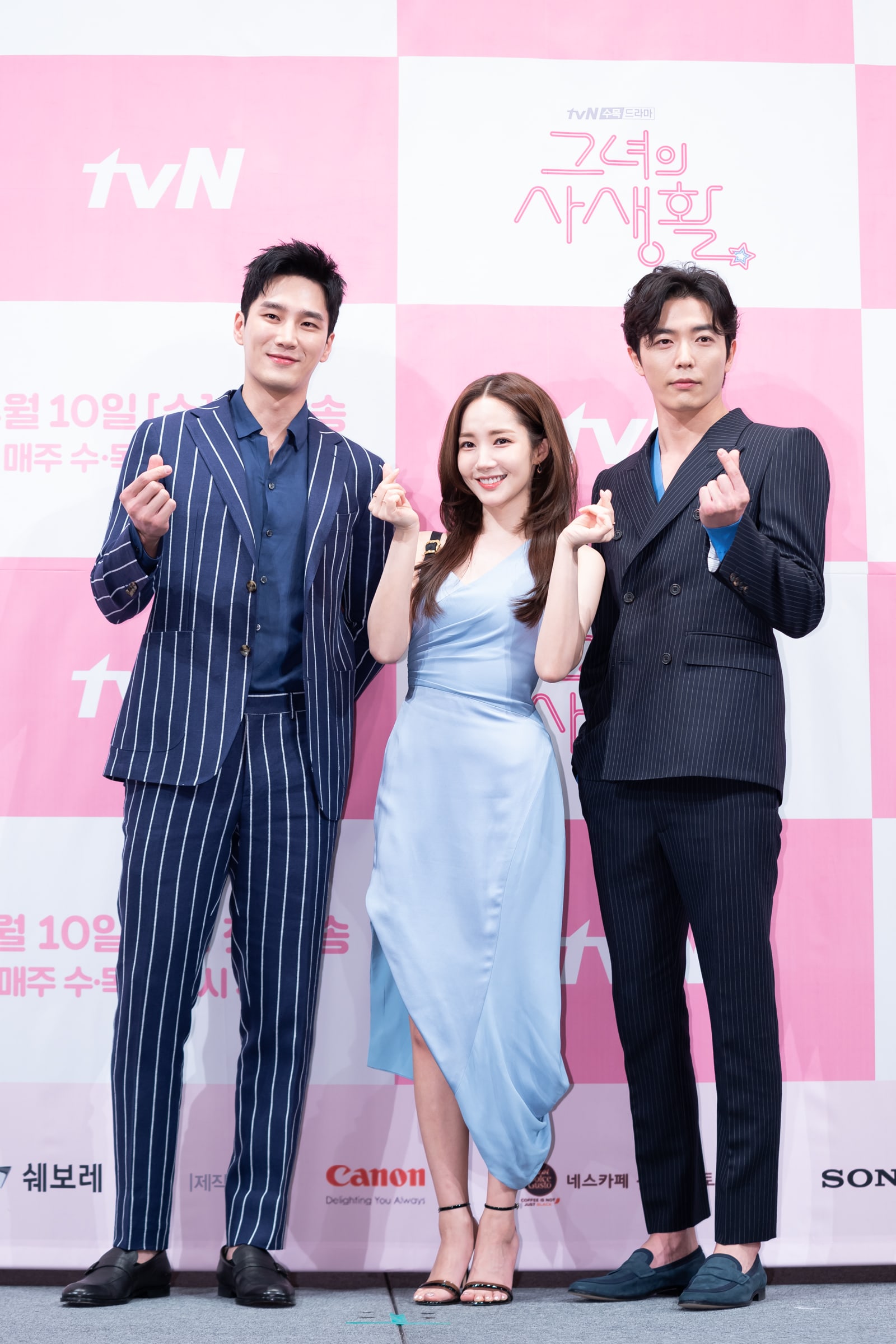 PD Hong Jong Chan began the press conference by explaining the drama. He said, “This is a story about a person who fangirls over idols, and two men who fanboy over the fangirl. I myself wasn’t very familiar with the concept of a fangirl, and I used to think that such a concept was far from the real world that we live in. However, while preparing for the drama, I realized that this could be a story about all of us. It’s about people who live passionately by loving and cheering passionately for someone else.”

He continued, “I wanted to deliver a bright and warm story. ‘Her Private Life’ tells the real story of Sung Duk Mi, a person who did not achieve her dream but continues to live. Being a fan of someone gave her a purpose to live passionately. This is more realistic than a story about a person who achieves a dream of ‘becoming successful.'” 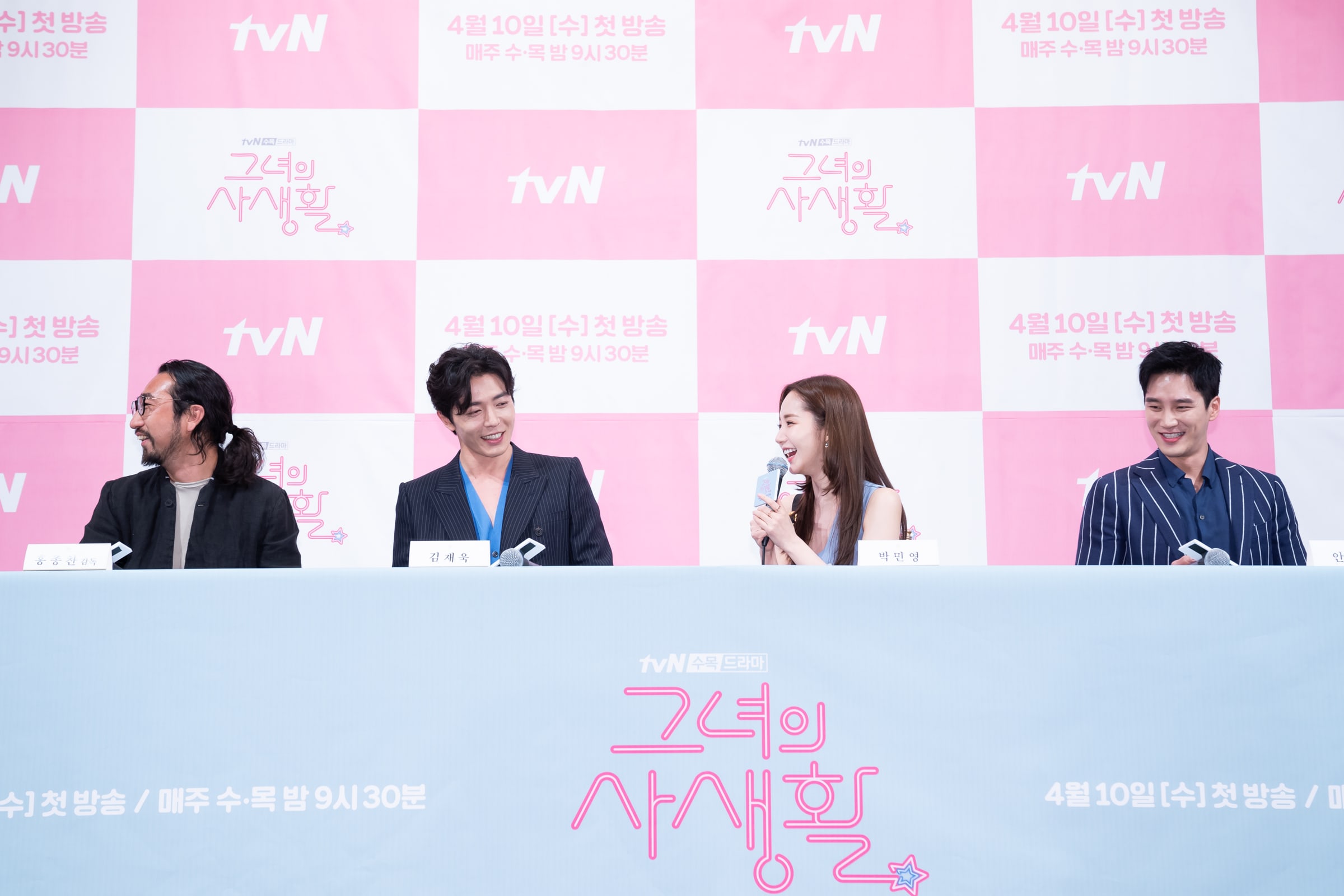 When asked about her own experience of being a fangirl, Park Min Young said, “I was a fan of H.O.T. I started my life as a fangirl of [H.O.T], but I’ve since moved on to dramas. Now, I’ve become a successful fan and filming many dramas like this. I’ve also fangirled over coffee and my dog. Fangirling is truly beautiful and fun. It is a tool that gives happiness in life.” 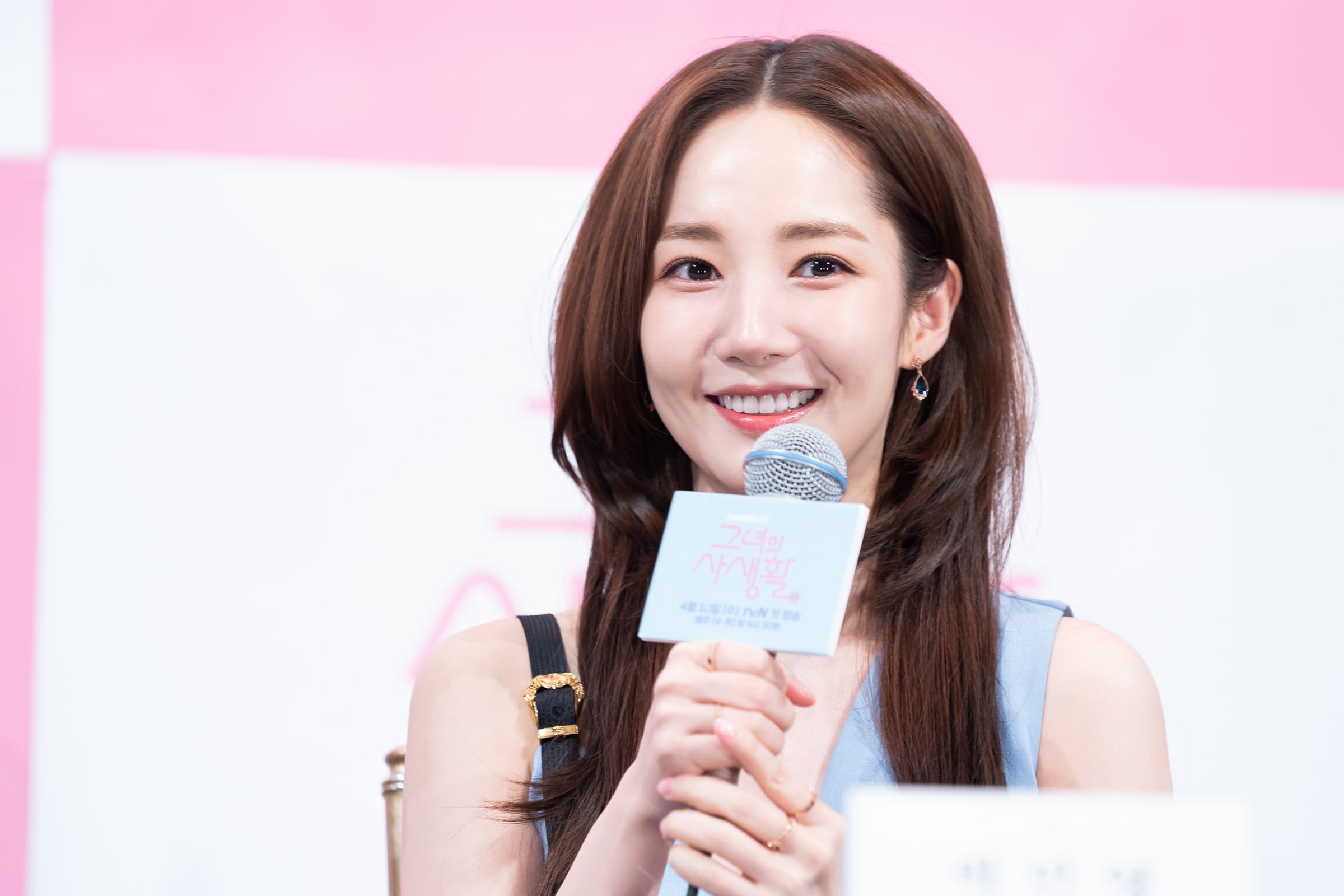 Ahn Bo Hyun answered a question about his character, Nam Eun Ki, a childhood friend of Sung Duk Mi who has a crush on her. The actor said, “This is my favorite character out of all the characters I’ve taken on until now. There are many aspects of him that I can relate to. I consider Sung Duk Mi as my bias, and because I’ve experienced one-sided love in real life, I’m able to apply [my own experience] to acting. I’m doing my best with the role I’m given.” 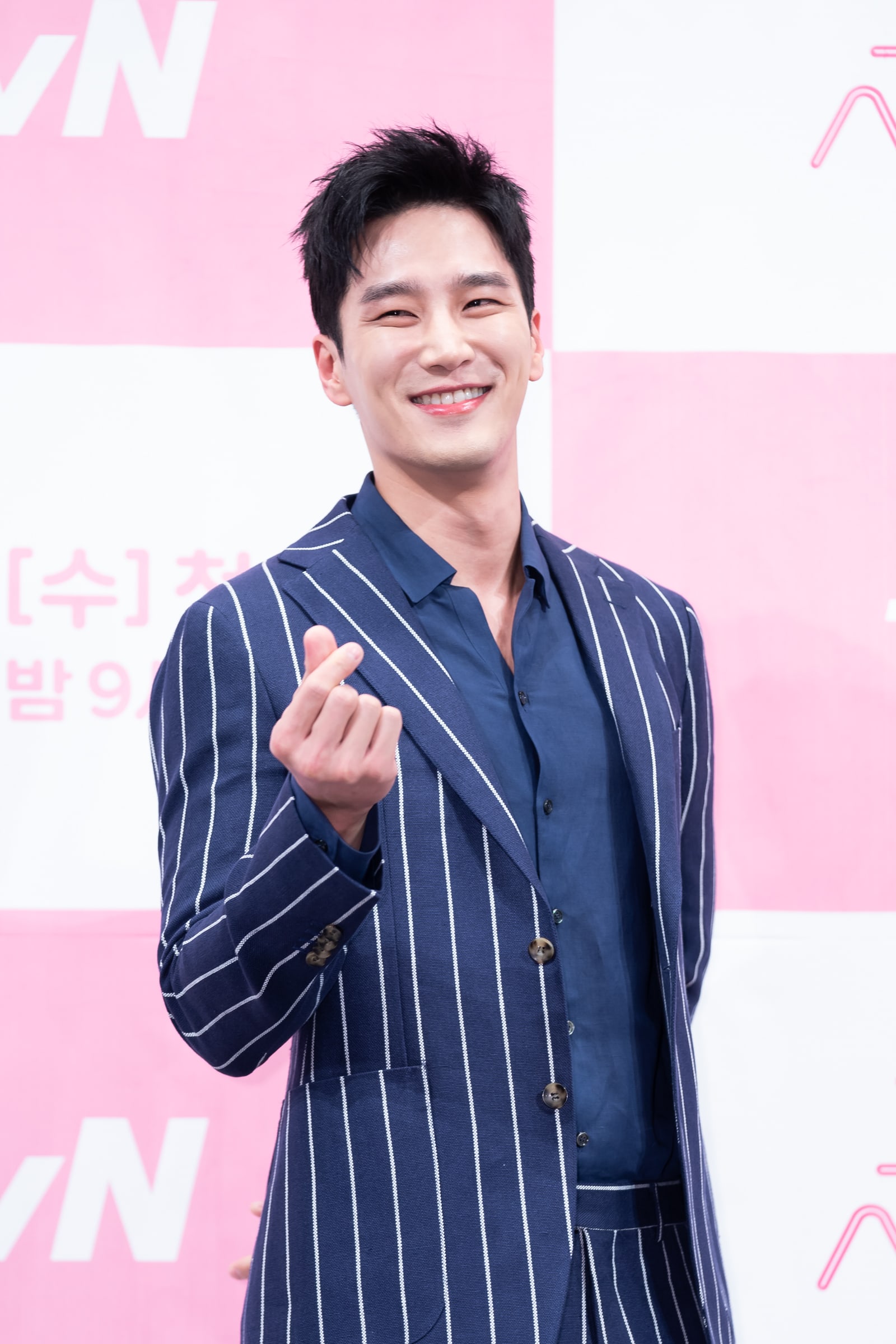 Kim Jae Wook talked about taking on his first-ever lead role in a romantic comedy. He said, “My previous dramas showed intimidating sides of me, and I was upset that some people were too scared to watch the dramas. I also heard that many people are hoping to see a brighter side of me, and right when I was wanting to do that, I got the offer [for ‘Her Private Life.’] I’m challenging myself with a role I have never taken on before, so I’m depending a lot on PD Hong Jong Chan and Park Min Young.”

He continued, “It makes me feel good and thankful, but I don’t feel too pressured about my role. I always think, ‘I just need to focus on the role I’m given.’ I don’t wish to continue to take on lead roles only. If there is a drama that I can be of help for, I will take on whatever role it might be.” 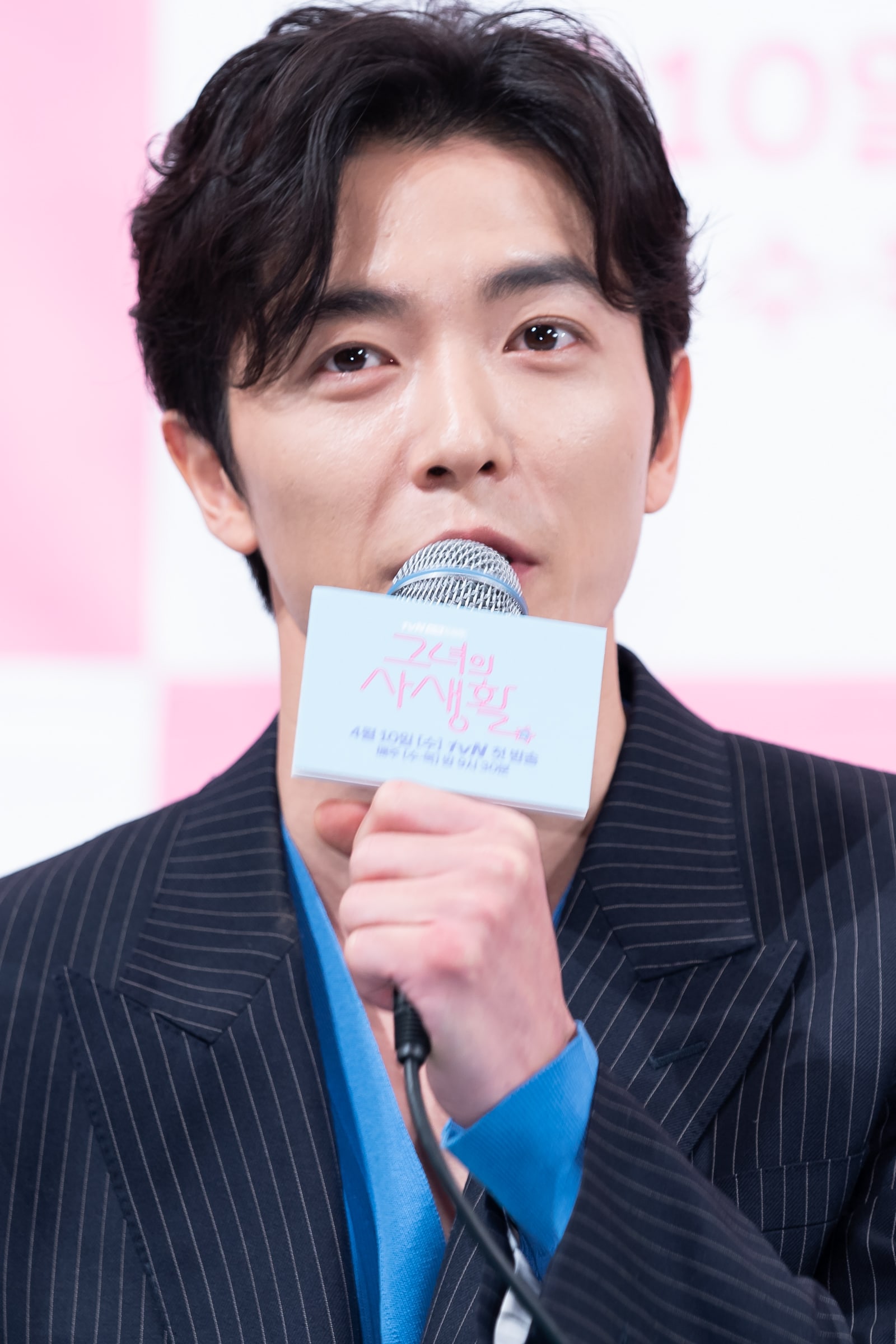 Park Min Young talked about her chemistry with Kim Jae Wook and Ahn Bo Hyun. The actress said, “Unlike their chic appearances, they are very friendly. We have great conversations to the point it makes me feel like I’m talking with my female friends. Their appearances are perfect for their roles, but their characteristics are not. If Kim Jae Wook’s characteristics were similar to that of Ryan’s, I might have hated him.” 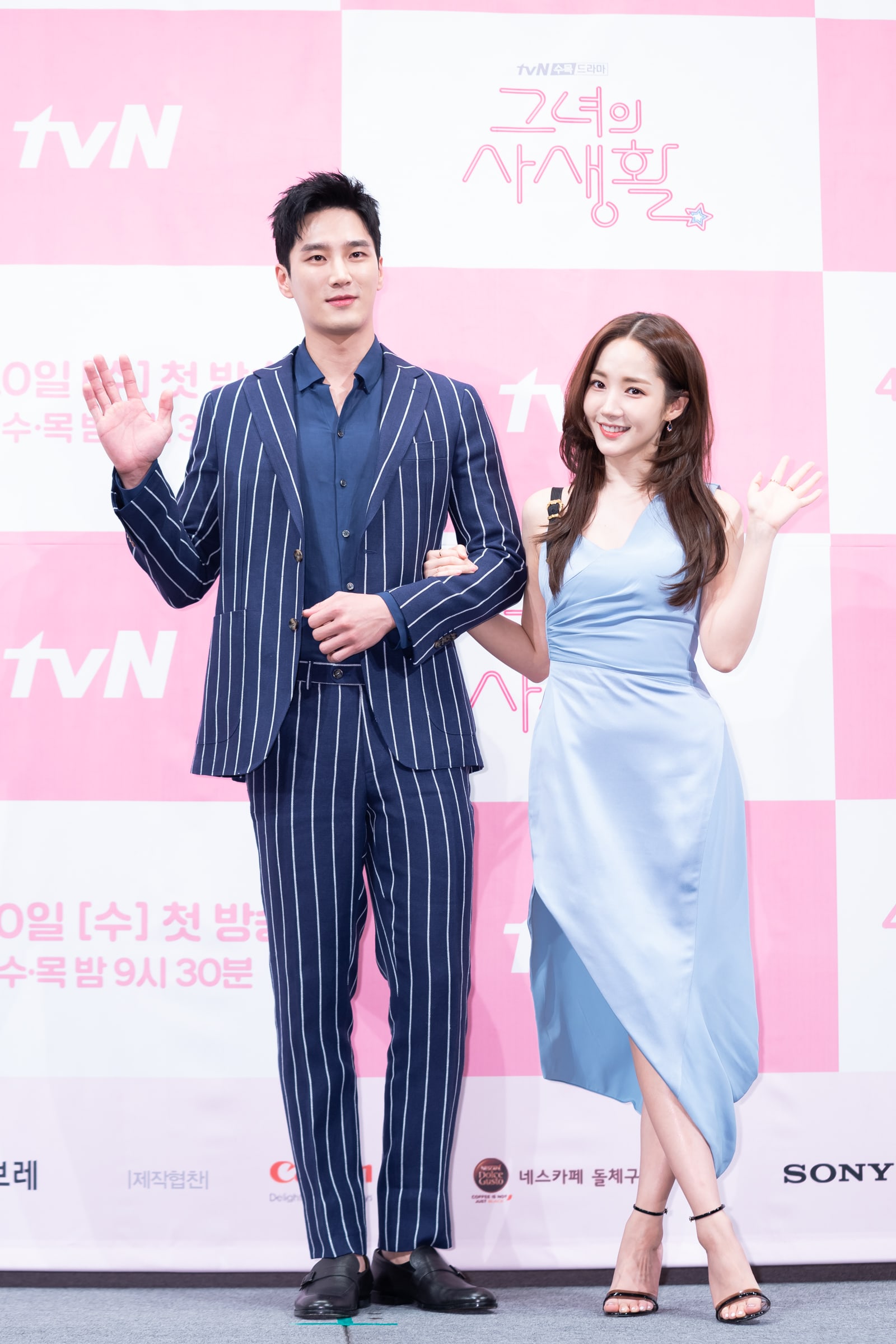 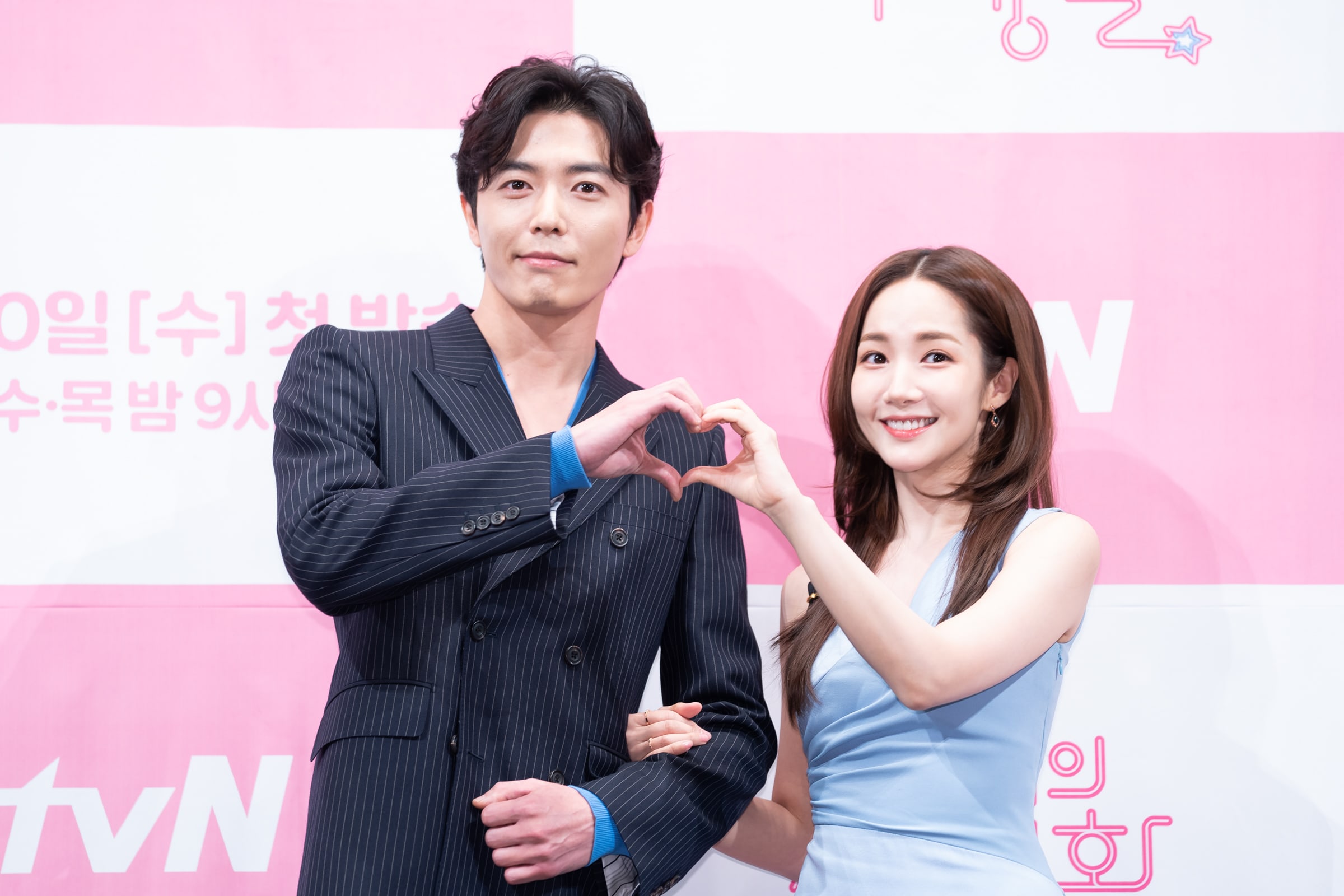 Park Min Young also talked about her previous drama “What’s Wrong With Secretary Kim?” and the success it gathered. The actress said, “I would be lying if I didn’t feel pressure about doing another romantic comedy. However, I have some great memories from my previous work, and I realized that I become brighter whenever I film a bright drama. I didn’t want to be satisfied with its success. I wanted to advance my acting regardless of the result.”

Kim Jae Wook also shared a line that he thinks was the most cringe-worthy. The actor answered, “I think it’s the line ‘I want to have you.’ However, I think that line represents the character Ryan the best. From the moment I saw the script, I’ve been discussing with our director and Park Min Young about how to best deliver that line.” 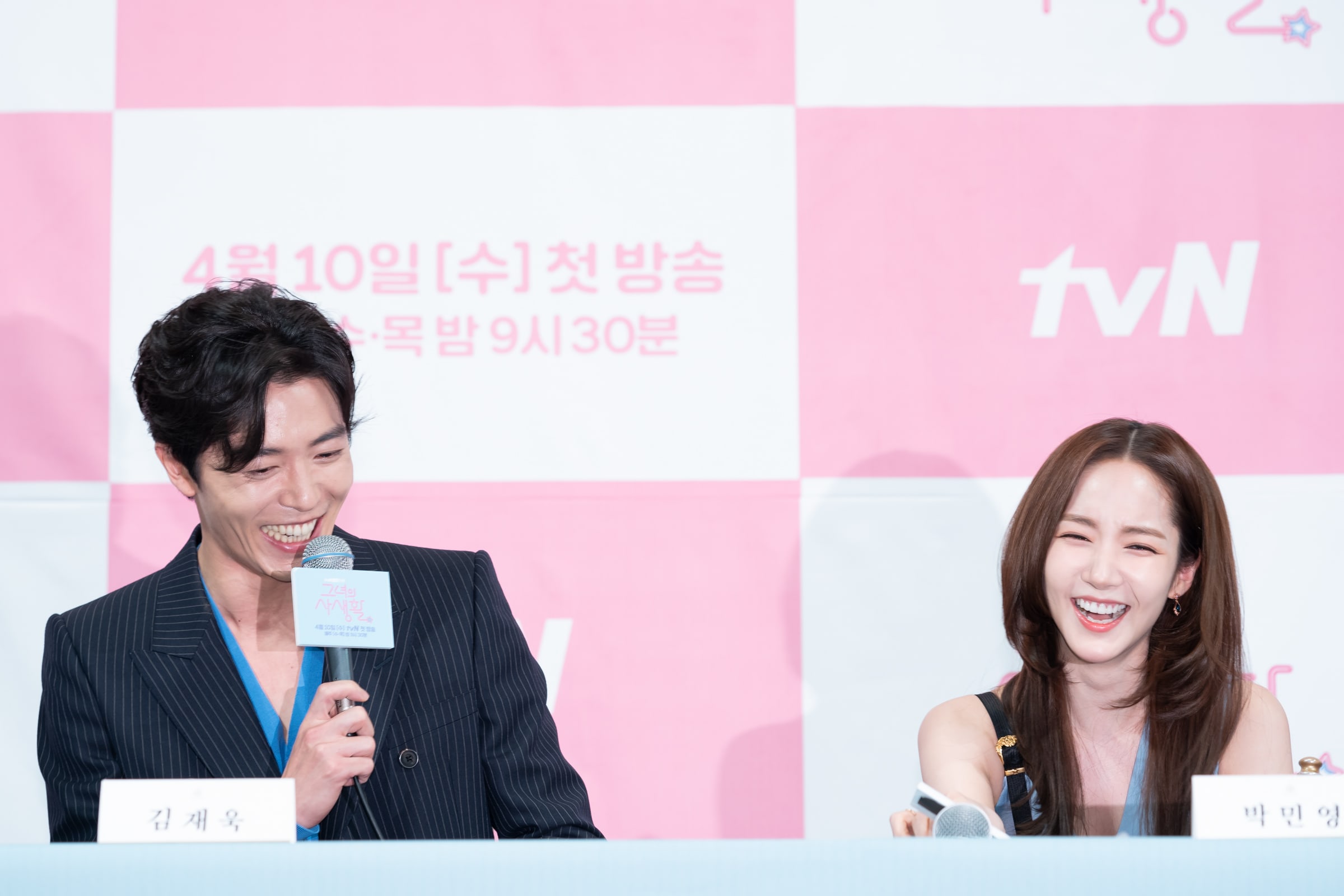 Lastly, Park Min Young addressed an issue that sometimes arises with the profession known as “home master” (people who take photos of celebrities and upload them on websites), where some home masters invade the privacy of celebrities.

The actress said, “There’s a character named Cindy that appears in the drama. She is very charming and she will definitely show growth throughout the drama, but she makes mistakes in the beginning. By doing so, she addresses some misconceptions and common mistakes of real-life home masters. Sung Duk Mi is a character that portrays the correct example of a home master who puts the safety of celebrities first.” 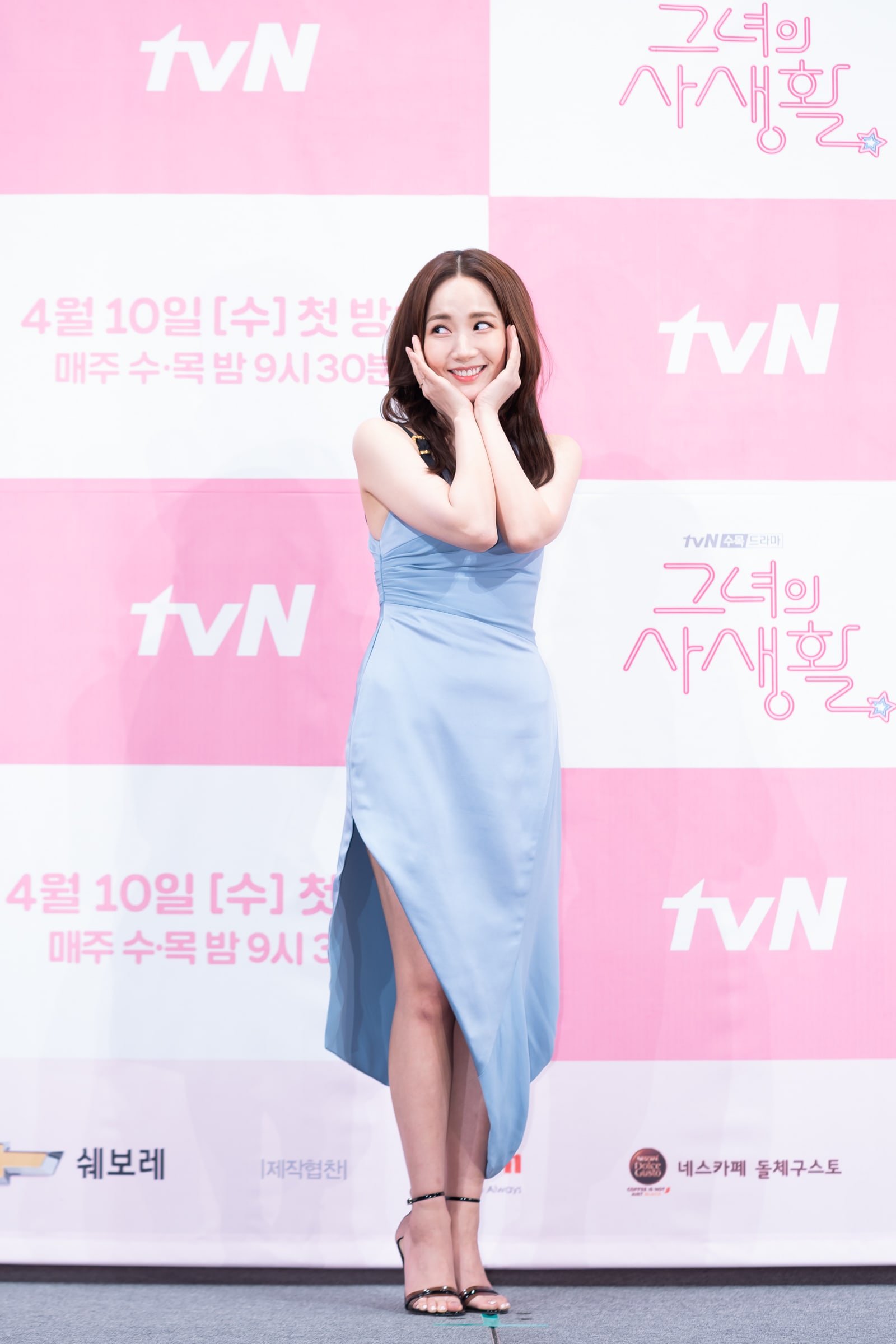 Park Min Young also shared that she learned a lot about being a home master from her older sister, who is a real-life fangirl. The actress explained, “I received this script last year and asked my sister about the work of a home master. Afterwards, I would always be looking at home masters everywhere I went. I actually became a host of a music awards ceremony just to see idol home masters. I was curious about the profession, and I wanted to see how they work in the field. I also watched previews of photos and videos of idols going to work. I witnessed the chaos they go through.”

Park Min Young further explained, “My sister would be studying until the clock strikes 11:30 p.m., at which she grabs all the cell phones available at home. There are about 7 to 8. She would lay them down in line and start voting. Seeing my sister do that, I realized that it’s possible to be a fangirl and also diligently do your own work.” 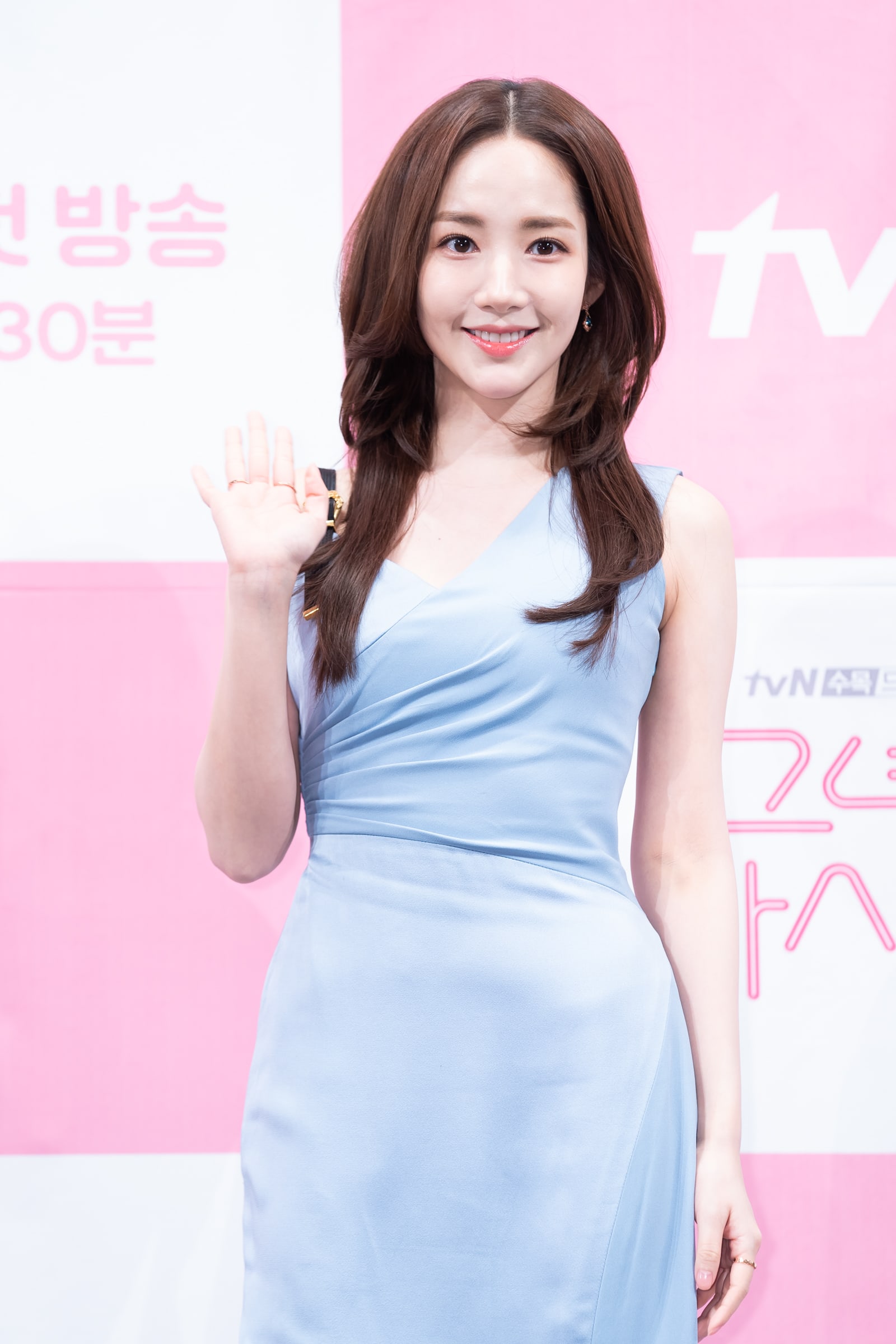 The actress concluded, “[My sister] finds happiness in life not through alcohol or anything else, but by being a fan. She finds joy by streaming a song and watch its ranking go up. I was able to break my own stereotype while seeing her so happy. My sister is my role model. She is the true Sung Duk Mi.”

Check out more photos from the press conference below! 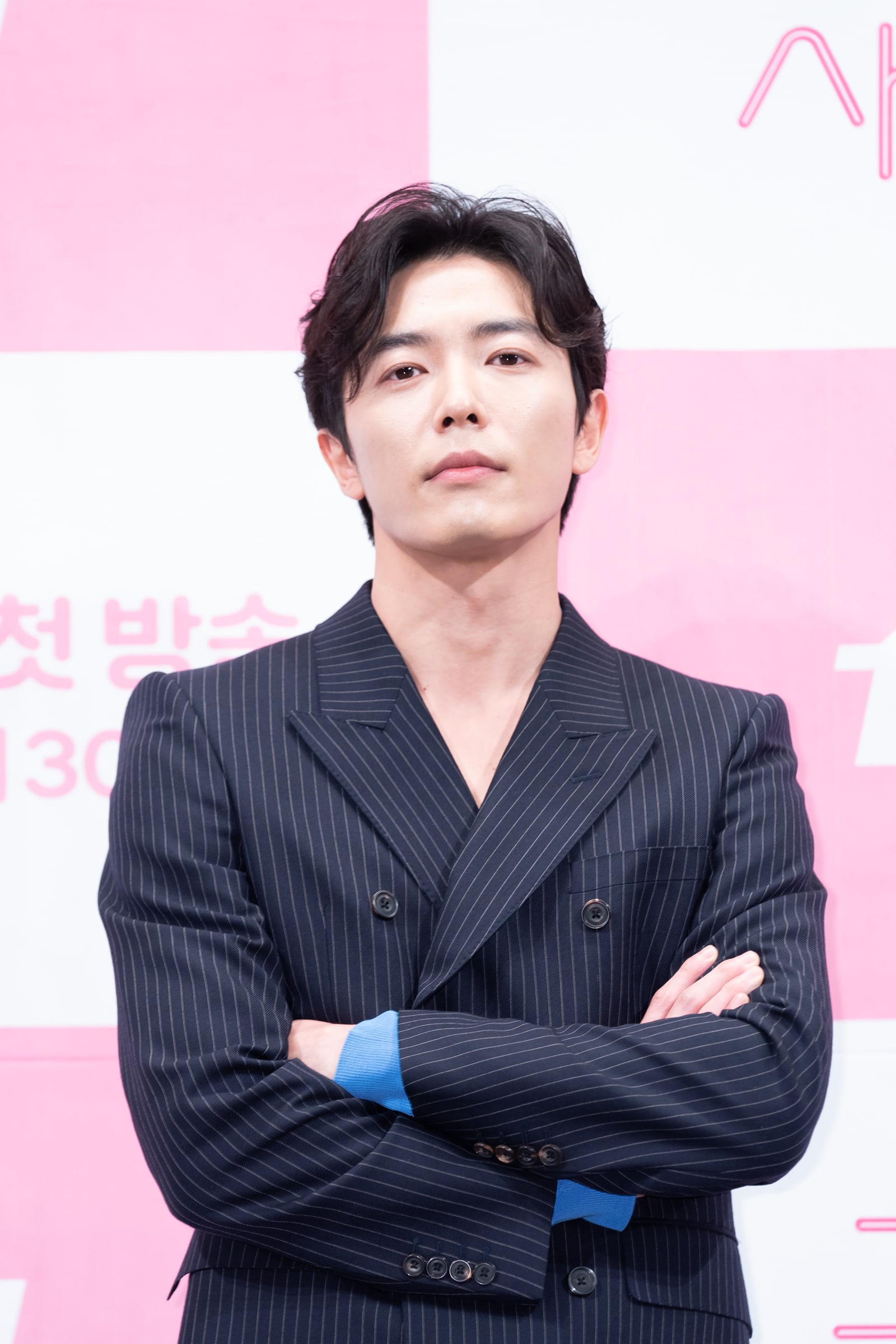 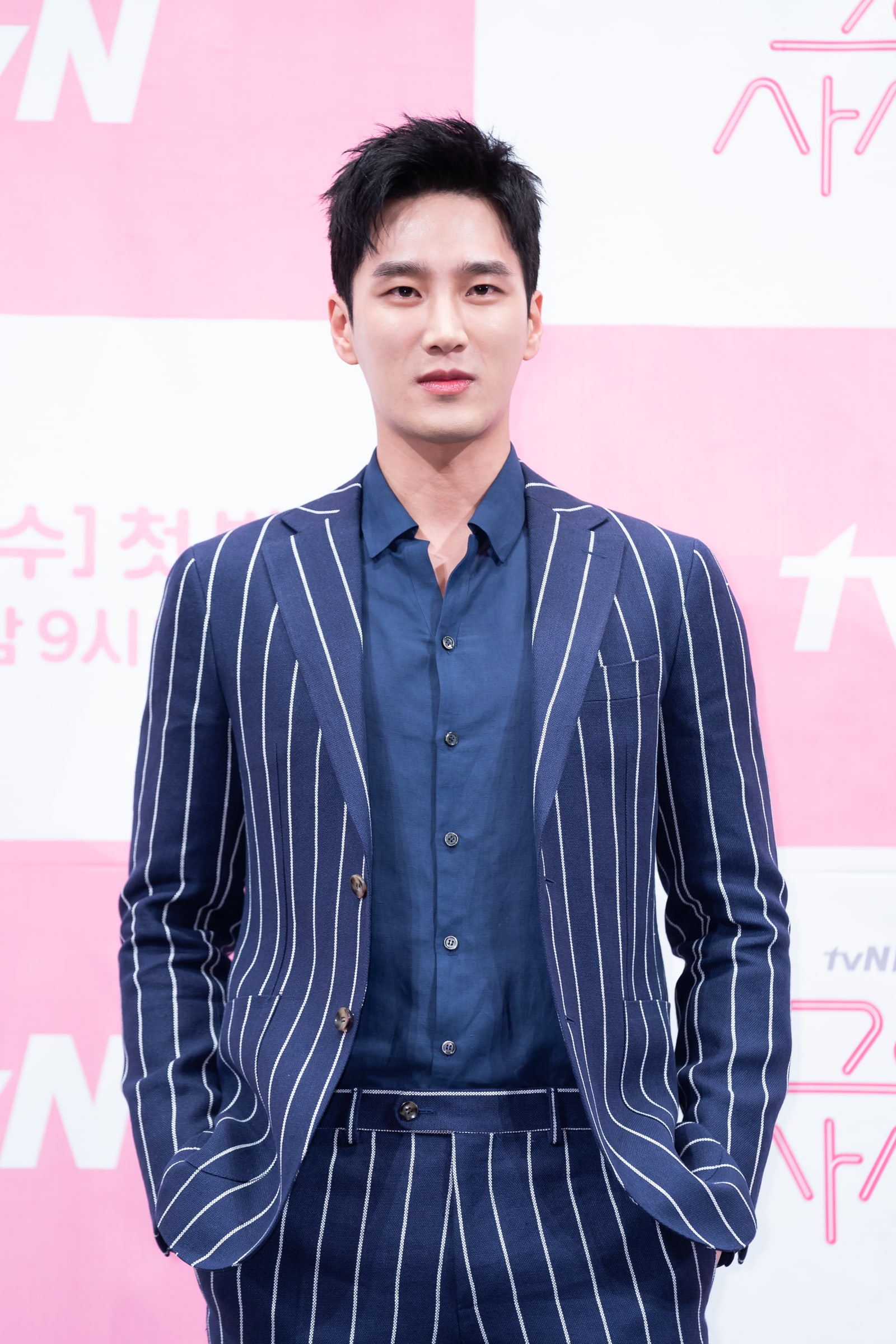 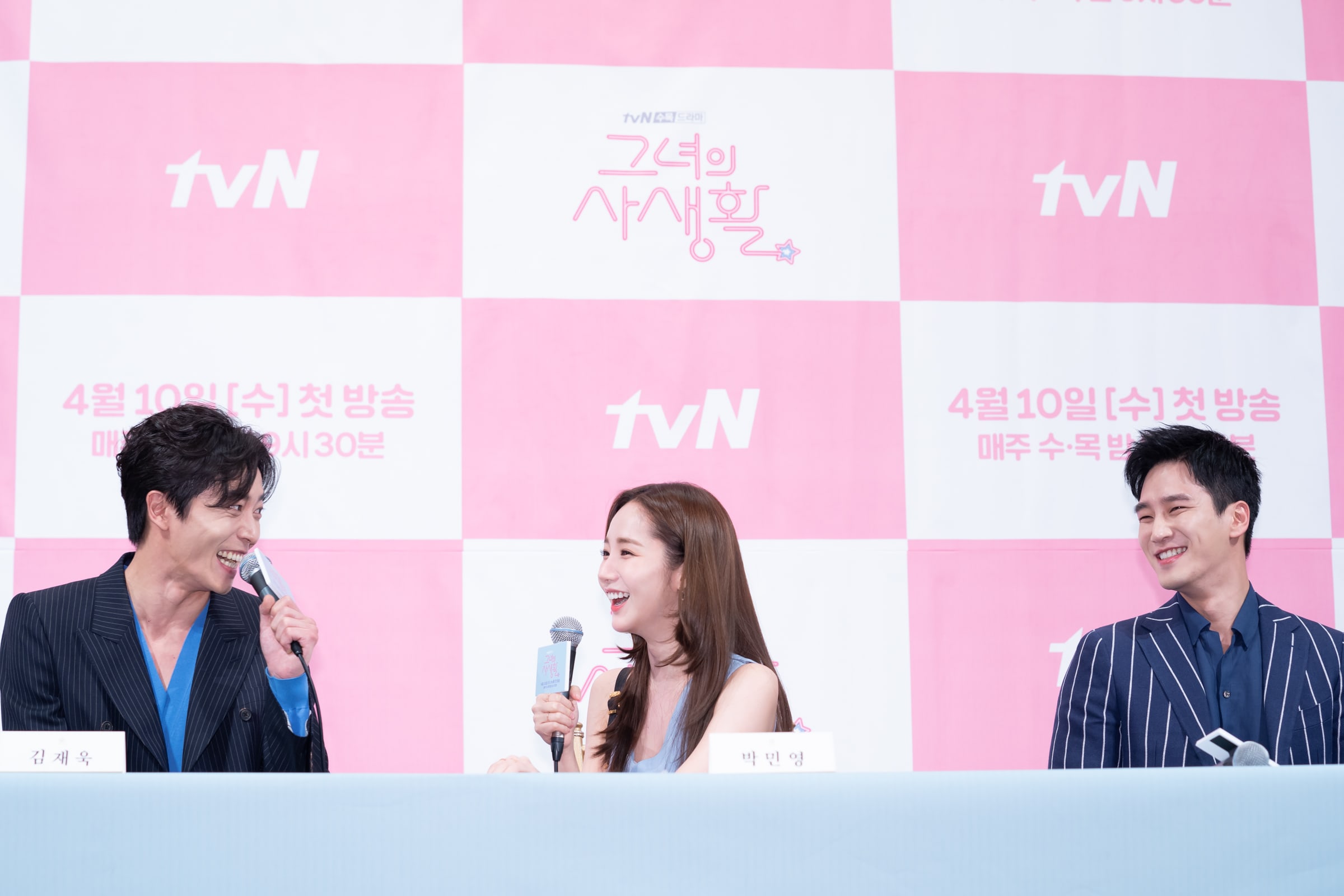 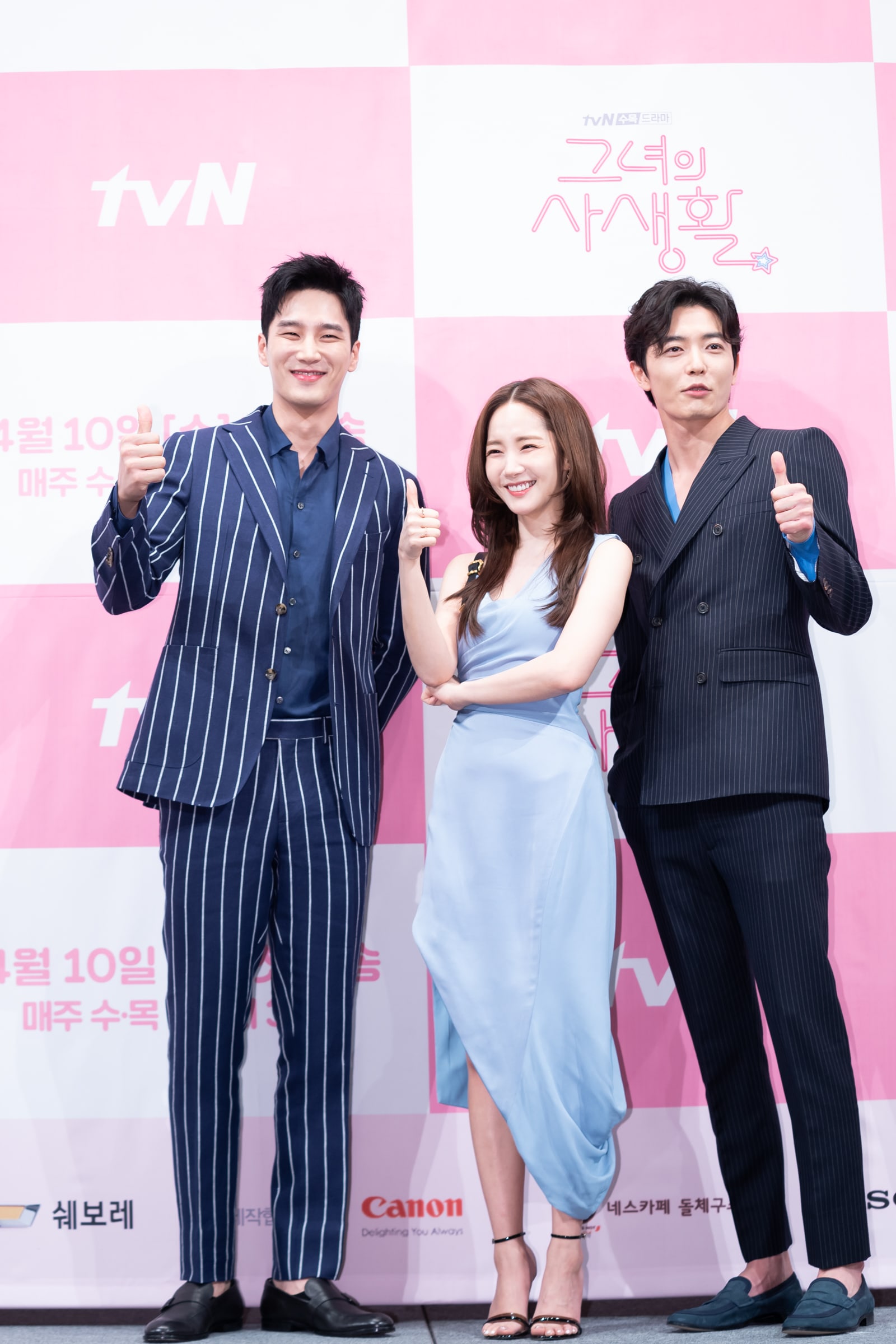 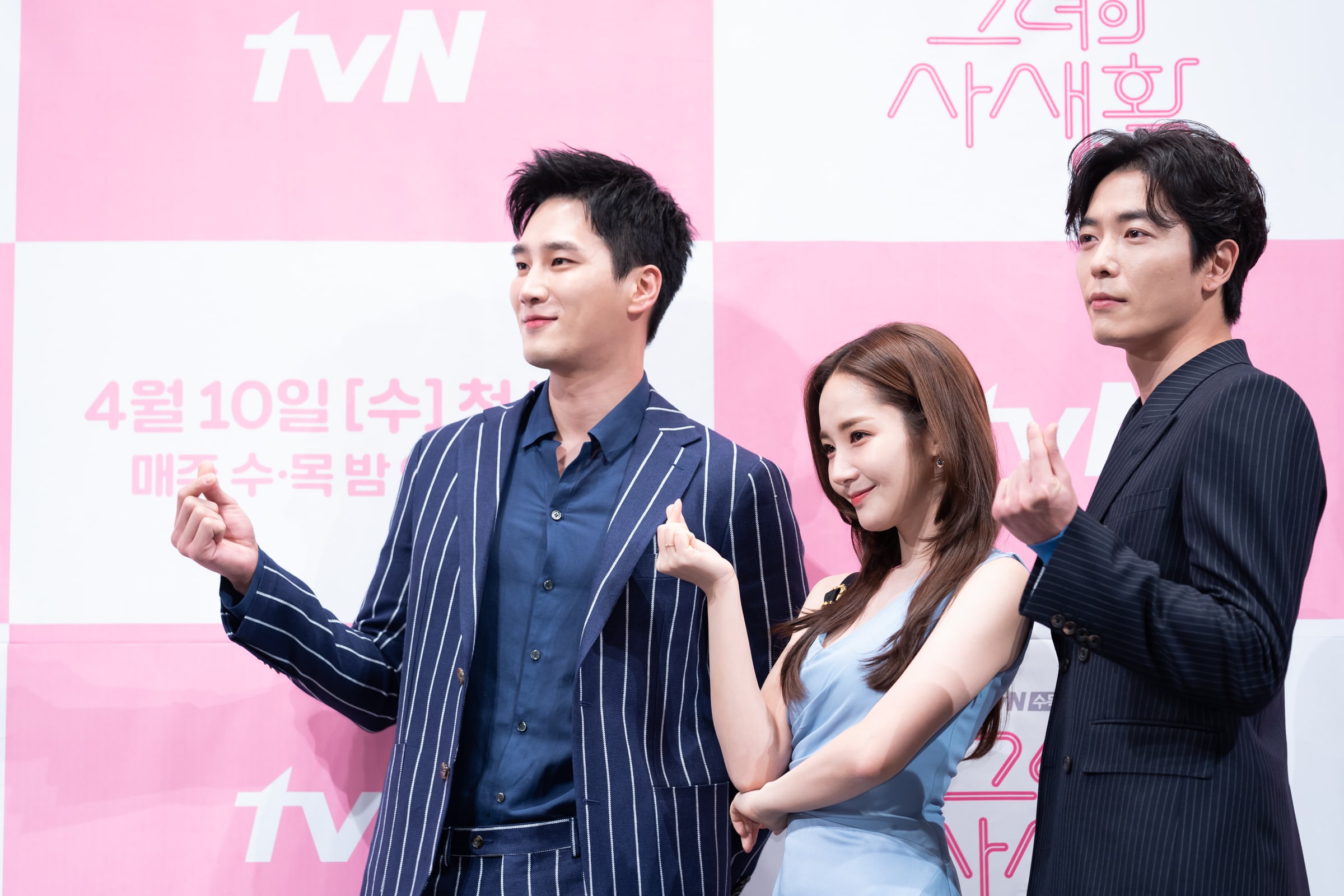