Girls’ Generation’s Seohyun made an unplanned appearance on JTBC’s “Let’s Eat Dinner Together”!

On the April 3 broadcast, IZ*ONE’s Jang Won Young and Block B’s P.O walked around the neighborhood of Chungdam to find dinner companions.

At 6 p.m., they separated into two teams (P.O and Kang Ho Dong, Jang Won Young and Lee Kyung Kyu) to succeed at their mission. Lee Kyung Kyu and Jang Won Young were walking around and ringing doorbells when one of them happened to be the home of former “The Return of Superman” cast member Lee Hwi Jae.

The cast and staff did not know in advance that Lee Hwi Jae lived there, and Lee Hwi Jae was equally confused as he opened the door. “I thought it was a delivery,” explained the TV personality.

When Lee Kyung Kyu asked why he was home at this time, Lee Hwi Jae replied, “I don’t really go out much. Seo Jun, Seo Eon, and my wife went out and it’ll take about 30 minutes before they come home. Dinner isn’t ready at all.”

Lee Kyung Kyu then turned around, and told Kang Ho Dong and P.O about this unexpected encounter when they met up again. 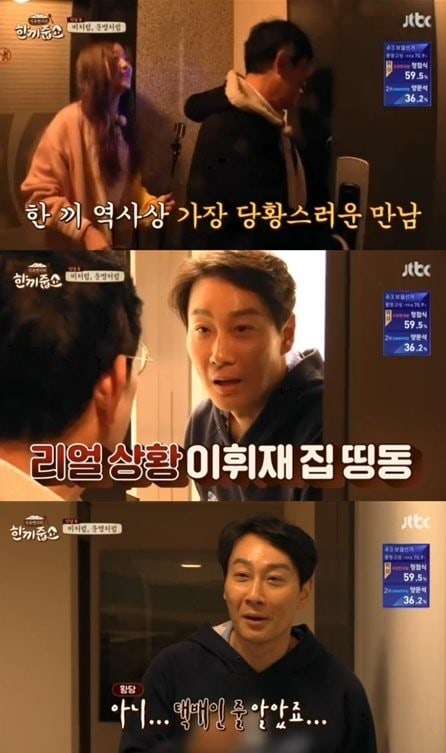 Kang Ho Dong and P.O then rang the doorbell of a different home. While calmly carrying on a conversation with a homeowner over the intercom, they quickly learned that they were speaking to Seohyun! This was not her first surprise appearance on the show as the singer-actress previously ran into Kang Ho Dong and Lee Kyung Kyu on the streets while driving by in her car in 2016.

She said, “I don’t have any makeup on. I’ll ask my parents.” In the end, Seohyun turned down their request but said that she would come downstairs to say hello.

When she arrived on the first floor, Kang Ho Dong and P.O greeted her with the choreography to Girls’ Generation’s “Genie.” Seohyun asked, “Do you know my house?” and Kang Ho Dong replied, “I don’t, but [we see you] every time we film in the neighborhood of Chungdam. Seohyun has made various kinds of appearances on ‘Let’s Eat Dinner Together.'”

The MC then asked why she turned them down, and she explained, “I would have accepted if I lived alone, but my parents already finished eating. I brought some snacks from home that I eat and enjoy.” Seohyun handed the two stars a bag filled with rice crackers and dried persimmon.

Kang Ho Dong and P.O then gave her some positive energy and Seohyun thanked them. Shaking the MC’s hand, Seohyun added, “I’ll appear on ‘Let’s Eat Dinner Together’ sometime in the future.” 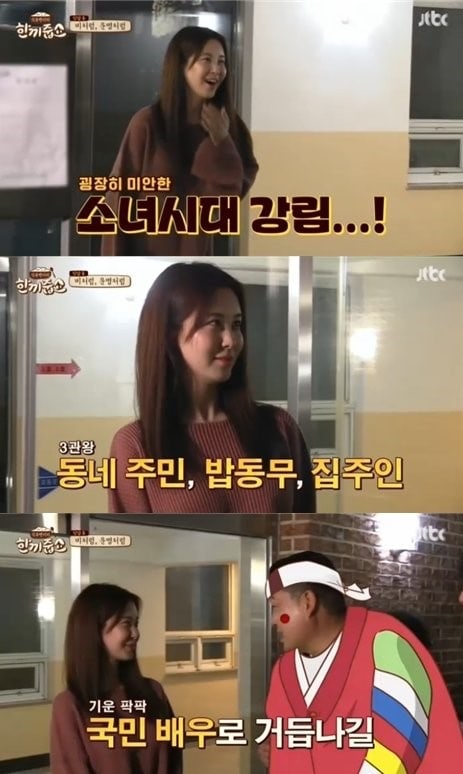