Mnet has shared a new teaser video for BTS’s comeback special! The teaser features footage of their fans ARMY sharing how they show their love for BTS, while Jungkook speaks in a narration about how they want to know everything about ARMY.

Mnet has released a teaser for BTS’s “Map of the Soul: Persona” comeback special, which will be airing in two weeks on April 18!

The teaser features different footage taken by fans. RM says, “Living in the same space. In the same time. In here, and now with you. I want to know you better. Let me hear your story.”

At the end of the teaser are Korean and English hashtags which say “#curiousaboutARMY,” and directs fans to official social media pages for “M Countdown” for instructions on how to submit videos that may be used for the BTS special.

Here are the instructions: 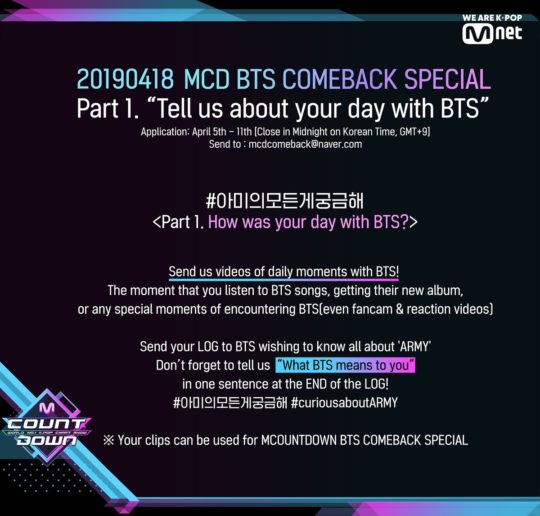 “Map of the Soul: Persona” is due out on April 12, and the group will stage their comeback performance on “Saturday Night Live” on April 13.