In the drama, Park Min Young plays the character Sung Duk Mi, a completely professional, talented gallery curator who moonlights as a hardcore idol fangirl of an idol named Cha Si Ahn (played by ONE).

Here are the slang terms you need to know: 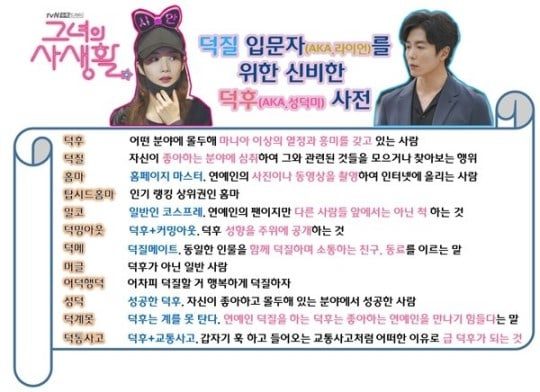 deok-hu: Someone whose passion and interest for someone or something exceeds mania level.

hom-ma: Homepage master, or fansite master. Someone who posts photos or videos of a celebrity on a dedicated page.

il-co: Cosplaying as a normal person. Someone who is a huge fan but pretends not to be in front of other people.

deok-ming out: deok-hu + coming out. When someone reveals to people around them that they’re a fan.

deok-mae: deok-jil mate. A friend that’s also a fan of the same celebrity and someone you can fangirl/fanboy with. Sung Duk Mi’s deok-mae is Lee Seon Joo (Park Jin Joo).

eo-deok-haeng-deok: If you’re going to fangirl/fanboy, be happy when you do it.

seong-deok: A successful fan. A fan who succeeds in same industry as the celebrity that they’re a fan of.

deok-gye-mot: deok-hus don’t get lucky. It’s difficult for a hardcore fan to meet the celebrity they like. Opposite meaning of seong-deok.

In the meantime, watch “Touch Your Heart”!