IU Reveals Which “Persona” Film Was The Most Fun To Shoot

IU talked about her first film journey with “Persona,” a Netflix Original, on the April 5 broadcast of KBS 2TV’s “Entertainment Weekly.”

“I didn’t know there would be this much interest in this project,” said IU. “Seeing everyone so interested this close to the premiere, I’m really excited.”

“Persona” consists of four short films, and when asked if there was one that she particularly had fun with, IU said, “Just focusing on pure fun, I have to say ‘Love Burn’ by director Jeon Go Woon was the most fun to film.” 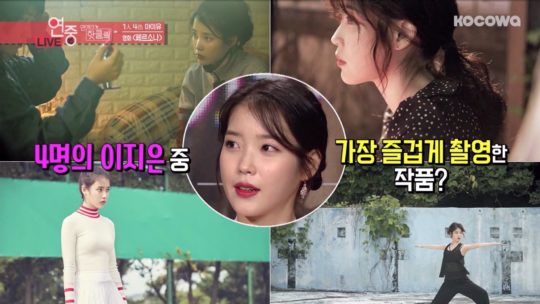 By contrast, there were no directors that she felt were scary, said IU, and director Im Pil Sung joked, “IU was the most scary.”

After “Persona,” IU has started to receive offers for various films, and when asked what kind of role she would want to try, she said, “I don’t want to box myself in. I want to do a role that moves me and that I feel is within my ability.”

Yoon Jong Shin, the producer of the films, “You’ll be able to see something you haven’t seen before from Lee Ji Eun (IU). Even the directors were impressed. It’ll be worthwhile watching.”

“Persona,” which was originally scheduled to premiere on Netflix on April 5, has been postponed in light of the forest fires that erupted on Korea’s eastern coast around Goseong and Sokcho. The fire started at 7:17 p.m. on April 4, and at 9 a.m. April 5, the Korean government declared a state of disaster for the surrounding areas after hundreds of acres went up in flames, displacing thousands of residents.

Watch this week’s “Entertainment Weekly” below:

IU
Entertainment Weekly
Persona
How does this article make you feel?