Mysteries In “He Is Psychometric” Viewers Are Itching To Solve

The mysteries surrounding “He Is Psychometric” has been keeping viewers on their toes!

tvN’s Monday-Tuesday drama “He Is Pschometric” has shown viewers three perspectives and three incidents. These three incidents include the Yeongseong Apartment case of 2005, in which a fire was started to destroy evidence of four women being killed, the Hanmin Nursing Home incident of 2016, which was carried out in a similar fashion to the previous case, and the black suitcase incident in which two female corpses were discovered inside a suitcase. Viewers are dying to discover the link connecting the three cases as well as the mysteries that have yet to be revealed.

Yoon Tae Ha (played by Jung Suk Yong), who was Yeongseong Apartment’s security guard at the time, was identified as the criminal who committed murder and started a fire as revenge after being unfairly dismissed. This was because blood stains of the victims were discovered on his security guard uniform. However, Yoon Jae In (played by Shin Ye Eun) had a memory of her father leaving after covering her with the security guard uniform, raising suspicions as to what really happened on that day. 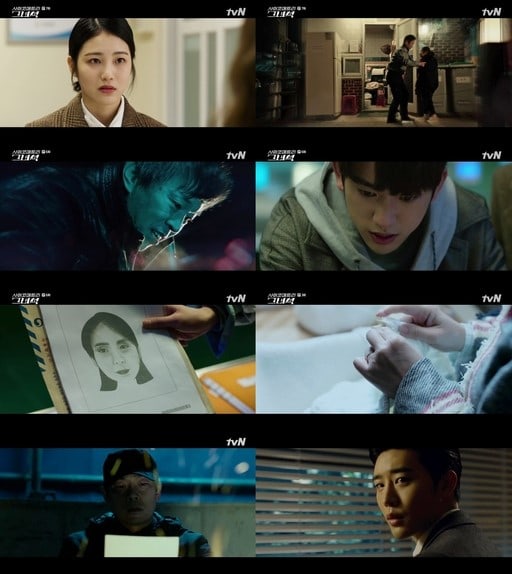 The mysterious woman wearing a thread ring: who is the fake Kang Hee Sook?

There was another witness to the 2016 Hanmin Nursing Home case. This was caregiver “Kang Hee Sook,” the women wearing the thread ring that Yi Ahn saw through his psychometric powers. However, the real Kang Hee Sook was killed by Kim Gab Yong, and her corpse was discovered in a black carrier in 2018. The fake “Kang Hee Sook” stole her identity and suddenly disappeared. The criminal organization Kim Gab Yon was affiliated with also confessed that they did not know where she was. Viewers are curious about the identity behind the woman who gained a new identity in exchange for someone’s death.

The mysterious past between Lee Seung Joon and Kim Kwon

The mysterious man (played by Lee Seung Joon), who has kept watch of Kang Sung Mo since 2005, shocked viewers when he suddenly stabbed Yi Ahn, who had been chasing after him for questioning. Furthermore, after invading his house and stealing a photo of Kang Sung Mo and his mother Kang Eung Joo (Jeon Mi Sun) together, the mysterious man spoke to Kang Sung Mo through a secretly installed CCTV, saying, “From the start, this was a fight in which one of us had to die.”

Every week, viewers are highly anticipating the new episodes so that they can discover the truth behind the secret past between Kang Sung Mo and the mysterious man who threatens the people around him.

The captivating mysterious thriller “He Is Psychometric” airs every Monday and Tuesday at 9:30 p.m. KST. Catch the latest episode below!

GOT7
Jinyoung (GOT7)
Shin Ye Eun
He is Psychometric
How does this article make you feel?