Seungri Accused Of Founding A Shell Corporation In Hong Kong

Seungri has fallen under suspicion of establishing a shell corporation in Hong Kong.

On April 7, SBS’s “8 O’Clock News” reported that BC Holdings, Seungri’s company in Hong Kong, may be a shell corporation: a company that exists only on paper, with no building or employees. Shell companies do not have active business operations.

Seungri founded BC Holdings in 2016 together with Yoo In Suk, the then-CEO of Yuri Holdings. Seungri, Yoo In Suk, and the head of a Korean consulting firm named Ryu each invested 15,000 won (approximately $13) in the company.

SBS’s reporters traveled to the Hong Kong address listed in BC Holdings’ corporate registration in order to visit the company, but were unable to locate it. Instead of BC Holdings, the address belonged to a Korean tax law firm that had assisted in the establishment of the company. When questioned about BC Holdings, an employee of the firm stated, “This is not a matter that we can confirm. We cannot say even one letter in a client’s name without permission.”

SBS then tried visiting a past address of BC Holdings, but local office workers could only say that they did not know anything about the company. One worker commented, “I never went inside the office, but it didn’t seem like there were that many employees.”

Concluding that there appears to be no BC Holdings office in Hong Kong, SBS’s “8 O’Clock News” speculated that the company is a shell corporation. 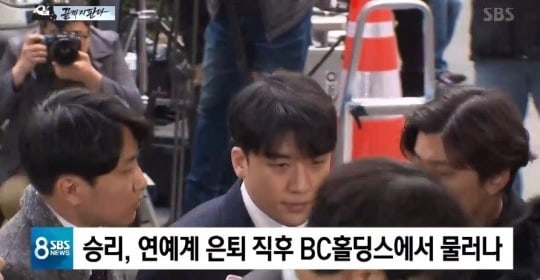 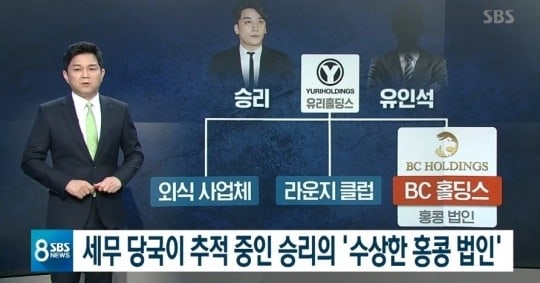 As Seungri undergoes investigations by both the Korean police and Korean tax authorities, Hong Kong tax authorities have announced that they will also be opening investigations into BC Holdings. A representative stated, “The scale of this matter appears to be very large. In the case that tax evasion has occurred, there may be criminal punishment decided in a court of law, or there may be a penalty fee of three times the evaded tax.”

SBS also reported that the major shareholders of BC Holdings recently passed on their shares all at once. Shortly after Seungri retired from the entertainment industry on March 11, he resigned from his position at BC Holdings. On March 15, he and a fellow Korean shareholder passed all of their shares to an unnamed Japanese individual, while a high-ranking Vietnamese executive at BC Holdings suddenly stepped down from his position.

Additionally, SBS revealed that BC Holdings’ Korean office, as well as the consulting firm headed by BC Holdings co-founder Ryu, were all located in the same space as Yuri Holdings’ office.

Ryu commented, “Seungri’s company BC Holdings is merely a client for which my company provides operational advice. Although it is out of the ordinary to establish a company in Hong Kong together with a client, I was simply providing help to Seungri and Yoo In Suk, as they were unfamiliar with this line of work.”

The police are currently looking further into the matter and investigating whether it is related to offshore tax evasion.