Ahead of the album’s release, more info has been released about the seven different tracks.

The title track, “Boy With Luv” featuring Halsey, is a funk pop song about happiness in simple love. RM’s solo, “Intro: Persona,” seeks to answer the question “Who am I?” while “Mikrokosmos” is an examination of one person’s small but vast universe. “HOME” is a message from BTS that says when they’re tired and lonely, the home they want to return to is where their fans are.

Track number 4, “Make It Right,” which includes credits for Ed Sheeran, is about the process of healing and the love you have for someone who has believed in from your rough beginnings.

Rounding out the album is “Jamais Vu,” a unit track with BTS members J-Hope, Jin, and Jungkook, and “Dionysus,” a hip-hop track with a strong beat.

Following the release of “Map of the Soul: Persona,” which has surpassed 3 million preorders according to BTS’s distributor Dreamus Company, the group will be putting on their comeback performance on “Saturday Night Live” on April 13 (local time). 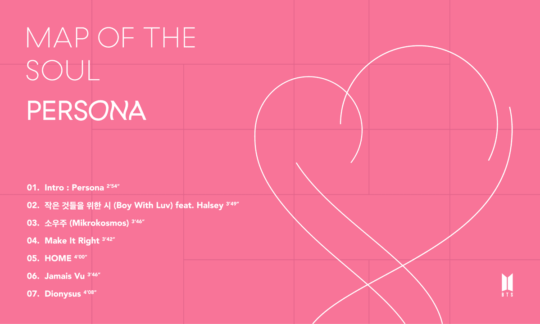