BTS Sweeps All Major Realtime Charts With “Boy With Luv” And “Map Of The Soul: Persona”

BTS has soared to the top of the charts!

On April 12 at 6 p.m. KST, BTS released “Map of the Soul: Persona” including the title track “Boy With Luv” featuring Halsey.

By 7 p.m. KST, “Boy With Luv” had already taken No. 1 on the realtime charts of six major music sites including Soribada, Genie, Naver, Bugs, Mnet, and Flo.

It’s reported that after the album’s release, users were not able to access the mobile site of Korea’s largest music site Melon for about an hour. Popular realtime search terms on a portal site included “Melon error,” “Access Melon,” and BTS’s song title “Boy With Luv.”

A source from Melon stated, “Due to the influx of traffic, it is not connecting on mobile.” They added, “We are currently identifying the cause of the error and restoring.”

By 8 p.m. KST, it appeared the issue had been corrected and BTS’s “Boy With Luv” made its debut on Melon at No. 1.

This means that BTS has now taken the top spot on every major realtime chart in Korea with their new title track!

Meanwhile, the major charts also include BTS’s b-sides following “Boy With Luv” at the top of the charts. For example, songs from “Map of the Soul: Persona” have taken over the top 10 on Melon. 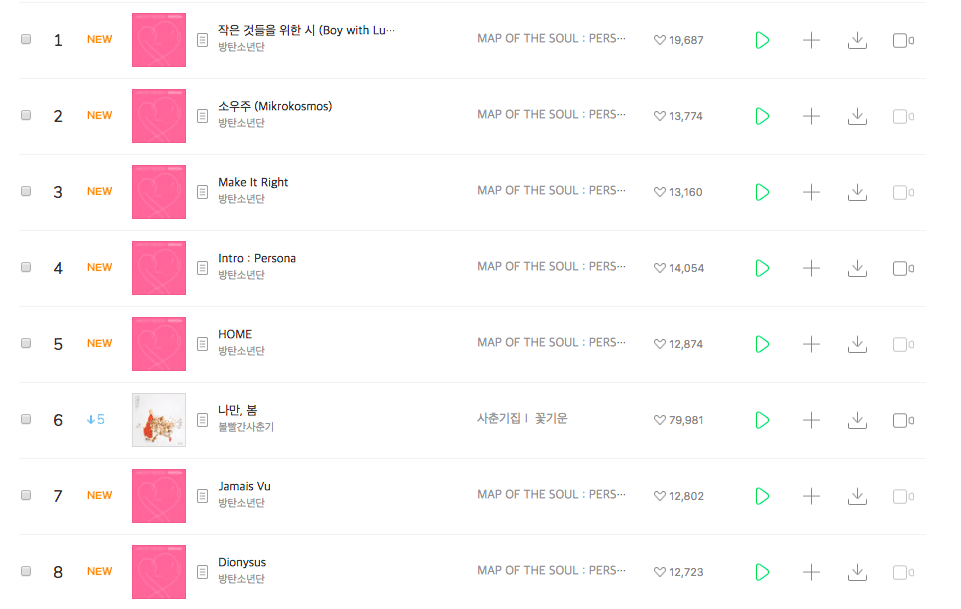 What’s your favorite song on “Map of the Soul: Persona”?