Another fun episode awaits the viewers of JTBC’s “Welcome to Waikiki”!

Last week, Woo Sik (played by Kim Seon Ho) began to change into a nice guy for Soo Yeon (played by Moon Ga Young) while Jung Eun (played by Ahn So Hee) gathered up the courage to pursue her dream of becoming an actress thanks to the support of Joon Ki (played by Lee Yi Kyung). Yoo Ri (played by Kim Ye Won) also went on a blind date to get away from Ki Bong (played by Shin Hyun Soo), and the life stories of these youth made viewers laugh and relate to the drama.

In the stills, Woo Sik and Mi Young (played by Lee Hee Jin) were caught during their secret rendezvous. Woo Sik entered Mi Young’s home while wearing sunglasses and a mask, and his eyes appear to be full of fear. Mi Young’s husband looks charismatic while holding up an arrow and someone Woo Sik probably shouldn’t mess with.

Woo Sik’s bad luck seems to continue as he looks drenched, and Mi Young piques viewers’ curiosity about her relationship with Woo Sik by handing him a mysterious envelope.

The April 15 broadcast will tell the story of Joon Ki and Jung Eun’s acting competition, Yoo Ri’s blind date Byung Chul (played by Shim Hyung Tak) and his sweet offer that catches her attention, and the biggest threat to Ki Bong’s baseball career. 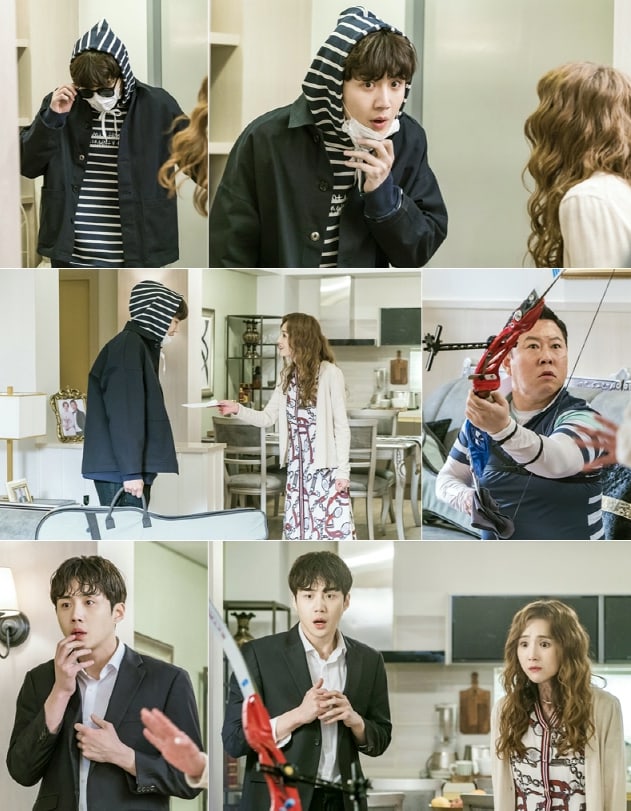 A source from the drama said, “Woo Sik, the icon of bad luck, brings laughter through his pitiful day in which everything he tries goes wrong. Please look forward to Kim Kwang Sik and Lee Hee Jin, who will make a special appearance as a married couple.”

“Welcome to Waikiki 2” airs on Mondays and Tuesdays at 9:30 p.m. KST. Check out the latest episode below!