The Good Data Corporation released their weekly ratings for the most buzzworthy dramas and cast members on April 16.

The company analyzed 25 dramas that are currently on air or are set to air soon from April 8 to April 14. They took into consideration news articles, blogs, online community forums, videos, and social media buzz to calculate their results.

SBS’s “The Fiery Priest” came out on top for most buzzworthy, maintaining its lead in the top position. The drama has captured the hearts of many viewers, and continues to set new viewership ratings records with each new episode.

Following the SBS drama was tvN’s “Her Private Life” and MBC’s “Special Labor Inspector Mr. Jo,” both of which are new to the charts and ranked second and third respectively. “Her Private Life” has been widely-talked about as it brings together Kim Jae Wook and Park Min Young, while “Special Labor Inspector Mr. Jo” has been receiving a positive response since its premiere and has earned its leading actor Kim Dong Wook the title of “Actor you can trust and watch.”

For actors, Park Min Young entered the rankings in first place for her role in “Her Private Life.” She is being praised for creating a relatable character, taking the concept of being an idol fan, which is a unique topic in the drama world, and making it her own. Her co-star Kim Jae Wook came in fourth place for his role as Ryan Gold. 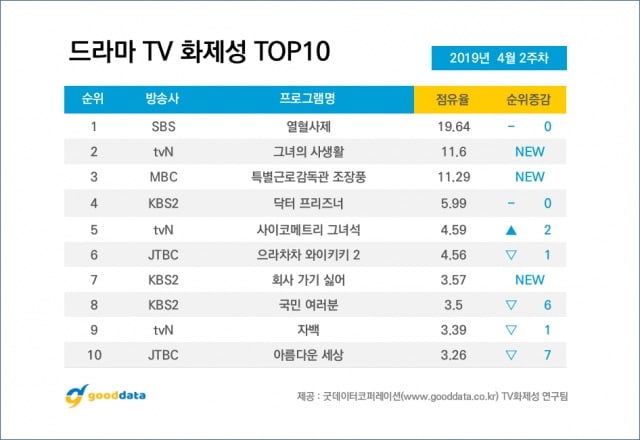 Check out the top 10 cast members this week 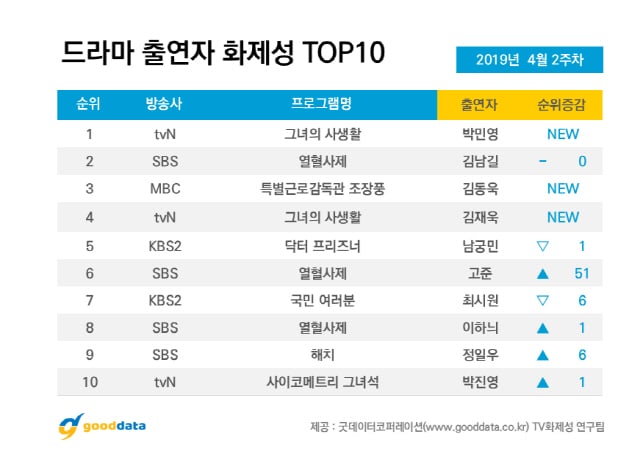