1THE9 Talks About Working With Crush, Low Ratings For “Under 19,” And Being A Project Group

1THE9 shared their thoughts on their debut.

On April 17, the rookie boy group, consisting of the top nine winners of MBC’s survival show “Under 19,” held their debut showcase.

1THE9 opened the showcase with performances of “Domino” and “Our Story” from their mini album “XIX” which includes seven tracks. The group’s leader Yoo Yongha began, “It’s an honor. This is meaningful since it’s a chance for people to learn about us. We’ll work hard.”

After appearing on the show as a director, Crush produced an idol song for the first time for 1THE9 with “Domino” and featured on the track which was pre-released to fans before the group’s debut.

Jung Jinsung said, “Crush was our director when we were trainees ‘Under 19.’ I felt really nervous because we were gifted a track from Crush. It was an honor that he brought together both his vibes and idol vibes. I was satisfied [with the song].”

Lee Seunghwan commented, “Crush captured us in a really detailed way. He meticulously checked our emotions and breathing, so I think the track turned out well. He was a bit different from what I thought. I thought he was a really kind and warm person on television, but he was also really meticulous and detailed in the studio. It felt like he was a teacher.” 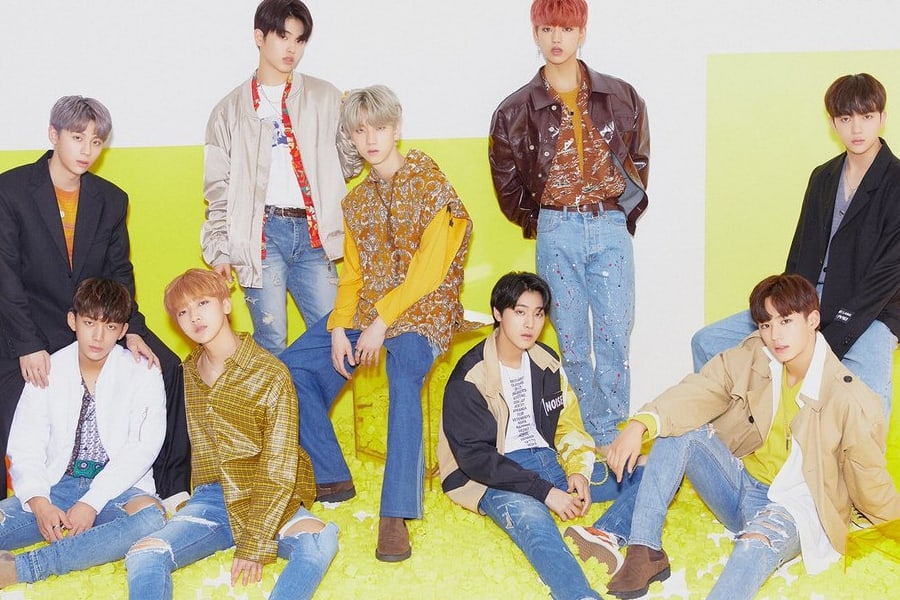 About participating in creating the choreography, Jeon Doyum said, “While preparing ‘Our Story,’ I thought about wanting to perform with the choreography that I created. I got to make it from start to finish.” On the members’ reactions, he revealed, “At first, I was worried because I created the choreography. But I felt happy because the members said they liked it and that it was great.”

Park Sungwon, who participated in songwriting, stated, “My hobbies are writing songs and lyrics. I have a lot of interest in those things. When I heard the B-side track, I thought that I wanted to write it and felt happy that it came out fun and well. I’ll work harder from here on out and greet you with better songs.” Jeong Taekhyeon added, “It’s my second time doing it after writing two lines for the ‘Under 19’ final performance. I was inexperienced and nervous because it was my first time, but I felt happy when people said that the lyrics were good and awesome, so I am satisfied with that.”

“Under 19” recorded low viewership ratings compared to other idol survival shows. About this, Jung Doyum said, “When I first appeared on ‘Under 19,’ my goal was to stand in front of an audience no matter what. Although the viewership ratings were low, I still achieved my goal and feel really happy because it felt like it was an opportunity for people to know about me.”

As a project boy group, 1THE9 is under a 17-month contract which includes five months of training and 12 months of promotions. On what they want their end to look like, Jung Doyum commented, “Since we are a group that has a set contract time, we can’t not think about our end. As we have always done since the start, we will work hard without regrets since our end has been decided.”

Yoo Yongha added, “I think we are making an effort to showcase our individuality. If there is a member who is good at dancing, we completely follow him, and we follow Yechan when he tells us about singing. I think our strength is that we lead each other.” Kim Junseo said, “We often take time to talk amongst ourselves. We were able to get close quickly because we don’t hide anything from each other when talking.”

1THE9 concluded, “We want to be good at everything and want to be called multi-talented idols. There are many ‘beagle’ (loud and playful) idols, and we feel confident about not losing when it comes to that. We also want to be described as ‘beagle idols.'”

If you haven’t yet, start watching “Under 19” with English subtitles below!

Under 19
1THE9
How does this article make you feel?