With one episode left until the finale, the characters of “The Fiery Priest” are getting closer to finding out the truth behind the murder.

In one set of stills released on April 19, Kim Nam Gil has taken off his priest vestments and is shown threatening someone with a gun. In previous episodes, his character, Kim Hae Il, could only watch as the priest Han Sung Kyu (Jeon Sung Woo) collapsed, bleeding, in front of him.

Faced with the possibility of losing someone else close to him, after he had already lost the priest Lee Young Joon (Jung Dong Hwan), Kim Hae Il was on the verge of despair. Unable to watch people get hurt because of him, Kim Hae Il resolves to punish Lee Joong Kwon (Kim Min Jae).

It appears as though the new stills show him setting off on this dark path, exchanging his clerical clothing for a dark suit. Although his character has always had an explosive temper, this cold determination is something new. 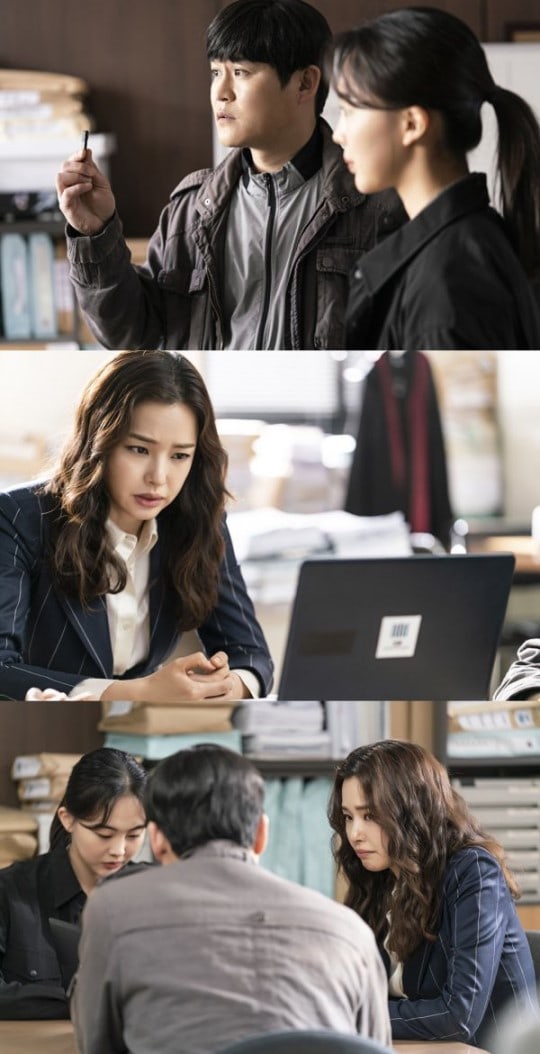 In another set of stills, Kim Sung Kyun and Honey Lee’s characters get closer to find the truth about Lee Young Joon’s murder. In Episode 36, Goo Dae Young (Kim Sung Kyun) had found footage of Lee Young Joon’s last moments before he was found dead under suspicious circumstances. Both Goo Dae Young and Seo Seung Ah (Geum Sae Rok) are shown reacting in shock to what they found.

Goo Dae Young shows this footage to Park Kyung Sun (Honey Lee), who looks serious after seeing what the video shows. Viewers can look forward to finding out in the penultimate episodes which character was with Lee Young Joon in the video just before he died.

Until now, it was believed that Hwang Chul Bum (Go Joon) was the murderer. However, he told Kim Hae Il that he was not the one who killed the priest and promised to tell him the truth behind the murder. It is still unclear whether he really intends to tell the truth or is just lying in order to get them to cooperate with him.

You can watch the latest episode of “The Fiery Priest” below: