Upcoming tvN drama has released a poster hinting at the tangle of relationships between Park Bo Young, Ahn Hyo Seop, and the other characters.

“Abyss” tells the story of a beautiful prosecutor and a chaebol heir who are reborn into different bodies with the help of a mysterious marble. The two of them then team up to track down the person who killed them both.

Kim Sa Rang and Ahn Se Ha play Go Se Yeon and Cha Min before their reincarnations. The two characters have been friends for over 20 years.

Park Dong Chul is a detective at Dongbu Police Station who mistakes Go Se Yeon as his ex-girlfriend, Lee Mi Do. The real Lee Mi Do, whose face is not revealed, is described as a lawyer. Seo Ji Wook is a fellow prosecutor who was Go Se Yeon’s colleague at the office before her reincarnation.

On the side of Lan Cosmetics, Han So Hee plays Jang Hee Jin, Cha Min’s ex-fiancée. Yoon Yoo Sun plays Cha Min’s mother, Uhm Ae Ran, who is the head of the company. Also included is the character Park Mi Jin, who is described as Cha Min’s nanny.

Off in his own category is the character Oh Young Chul, who is played by Lee Sung Jae. He is described as a professor in the emergency medicine department at Seoha Hospital. 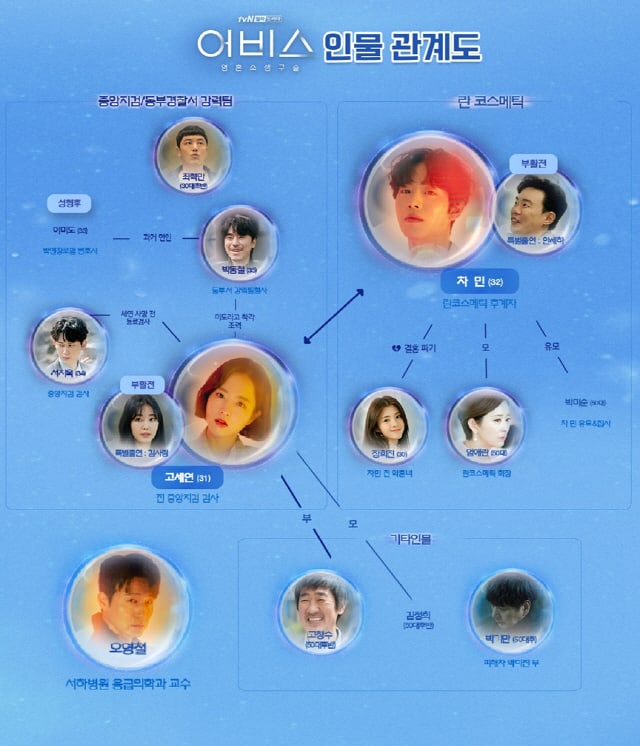 The production staff of “Abyss” stated, “There are many things that have not been revealed through this relationship chart. The lives of all these characters will be changed by the mysterious marble known as ‘Abyss.’ That is one of the key points of the show.”