Soyou Reveals A Secret Behind Her Hit Songs

Soyou shared an interesting story behind her successful releases on the latest episode of “Ask Us Anything”!

On the April 27 broadcast of the variety show, Kim Wan Sun, S.E.S.’s Bada, Soyou, and Lovelyz’s Kei appeared as guests.

Min Kyung Hoon asked Soyou, “You were successful when you promoted with SISTAR, but whenever you release a duet, it also becomes a hit. What do you think is your secret?” Soyou answered, “There’s a rumor-like saying in our company that Soyou needs to cry for [a song] to become a big hit. It’s half-joke, half-truth.”

Soyou continued, “For example, when [I recorded] ‘I Miss You,’ it was a Wednesday, and they said that the track had to be released right away on Friday as the [‘Goblin‘] OST without any mastering. So the director overseeing the recording became sensitive. At the beginning, every time I sang the opening line ‘When I look at you,’ he would [cut me off and] say, ‘Again.’ After I singing [the first word] ‘look’ over and over for an hour, I became exhausted, but the song was a hit.”

Lee Sang Min commented, “So that’s how [the song’s] exhausted tone of voice came about.” 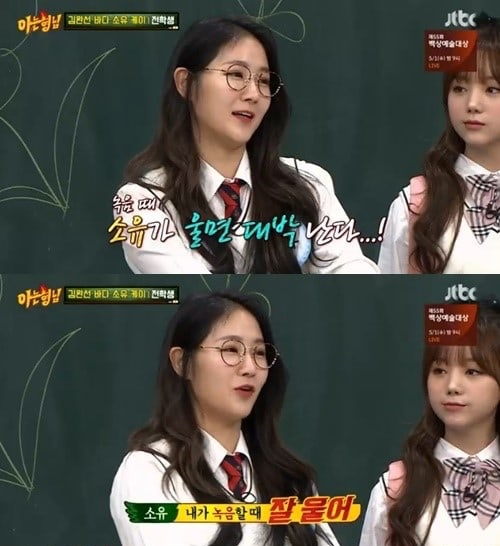 Seo Jang Hoon then asked if there were any duets that Soyou hadn’t been able to turn into a hit, and she named the songs she had sung together with Seo Jang Hoon and Jun Hyun Moo.

Soyou
Ask Us Anything
How does this article make you feel?