TXT has shared their reactions to their new music video for “Cat & Dog“!

On April 27, TXT uploaded a video of the group watching their latest music video for the first time, two hours before its official release. While Huening Kai and Soobin boast that they’re able to watch the video before their fans, Yeonjun and Beomgyu itch to press play, and the other members are forced to hold them back. When the music video finally starts playing, the TXT members excitedly clap at the sight of the Big Hit Entertainment logo, then settle down to focus on the video.

TXT watches their own choreography in awe, occasionally squealing to express their surprise at the video’s special effects, and the five members take turns praising each other’s facial expressions and gestures. They also seem to especially enjoy their scenes with actual cats and dogs, cheering and clapping excitedly whenever an animal appears onscreen.

As the video comes to an end and a pair of pawprints appear in the sand on the beach, Beomgyu makes the other members laugh by joking, “The director probably drew that with his fingers, right?”

The TXT members then all immediately agree to watch the music video again with Soobin exclaiming, “It’s so pretty!” Yeonjun firmly states that they have to watch it at least twice, since one time isn’t enough.

During their second viewing, the members all vocalize their thoughts a bit more. Beomgyu explains the first scene, in which they all run towards a window to look outside, by saying, “We’re taking the viewpoint of the cats and dogs here, and our owner has just left.” 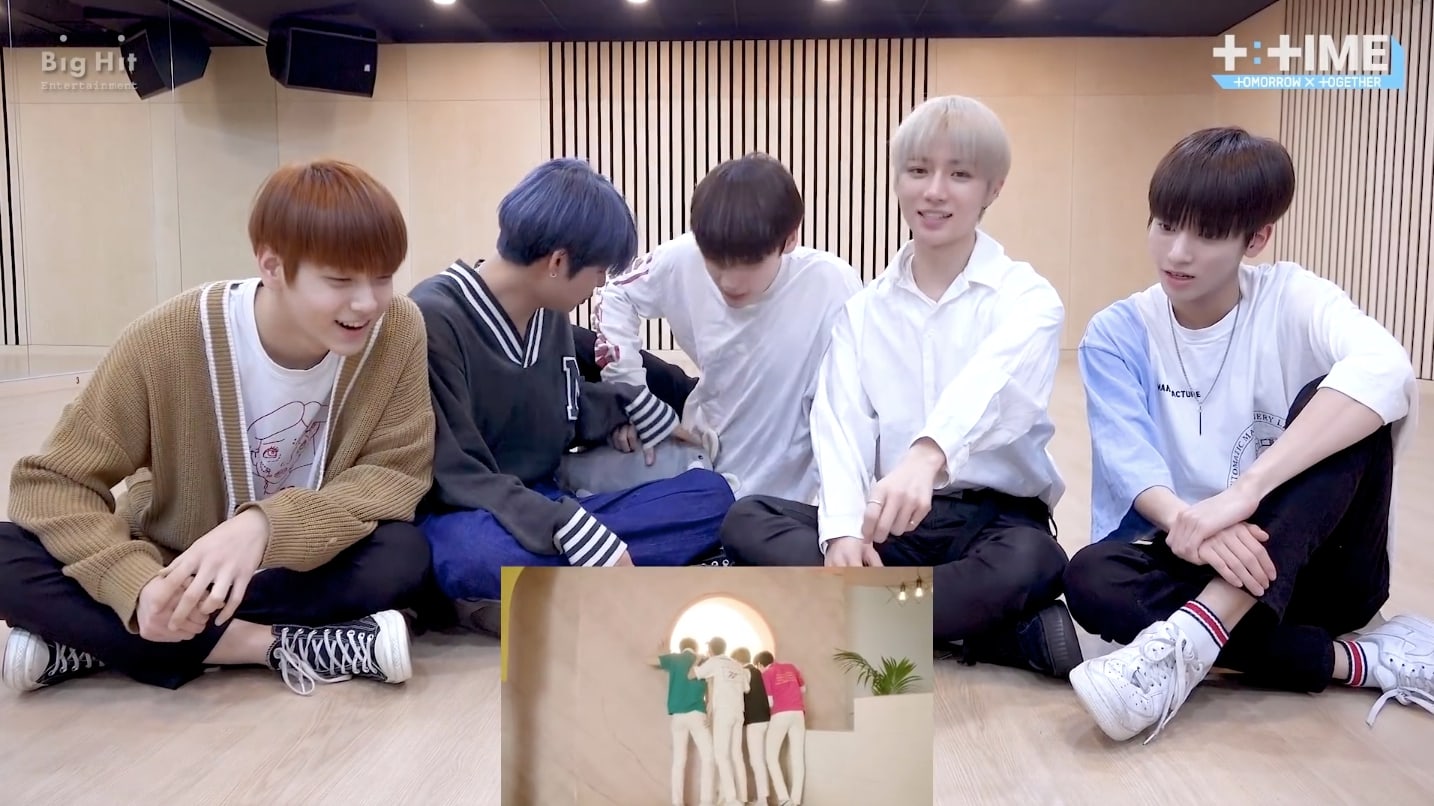 Even the second time around, the TXT members can’t help but smile at their scenes with the cats and dogs.

Soobin teases Huening Kai towards the end of the video by saying, “Isn’t Huening Kai sleeping for real [in this scene]?” All of the members laugh, and Huening Kai quickly denies that he was asleep during filming. The other members then agree that only Taehyun had his eyes open at the beginning, but that they all opened them at the end except for Huening Kai. They then continue to tease him by concluding that he did, in fact, fall asleep, while Huening Kai repeatedly claims that he did not.

The members all clap at the end of the music video, and Soobin comments, “It’s so pretty. The video is much brighter than I thought it would be.” He adds, “The scene of us riding in the car is also so funny.” Beomgyu laughs, “We were unable to beat the wind,” and Yeonjun imitates them struggling to open their eyes in the car because of the wind.

Soobin and Huening Kai exclaim that they had lots of fun while filming, and Yeonjun adds that he thinks the video came out very nicely. Huening Kai shares that there is about an hour and a half left until its release (at the time of filming) and asks that their fans look forward to the music video, with all of the members clapping in agreement. All of the TXT members then thank their fans and wave goodbye.

Check out TXT’s reaction to their “Cat & Dog” music video below!