“My Fellow Citizens” is an upbeat comedy starring Super Junior’s Choi Siwon and Lee Yoo Young as a married couple who have no idea what their spouse does for a living. Every episode is filled with laughs and unexpected twists.

On April 27, the drama released new photos of the cast on set. The first picture shows Choi Siwon looking over his script together with producing director (PD) Kim Jung Hyun. Although his role as a con artist is somewhat hard to relate to, since he has no personal experiences similar to those of his character, Choi Siwon’s diligence in analyzing the script together with the production staff has enabled him to portray his character Yang Jung Gook convincingly.

Lee Yoo Young stars in the drama as Choi Siwon’s police officer wife Kim Mi Young, who becomes extremely nervous after discovering her husband’s job. In contrast to her tense character, the actress smiles brightly on set in the top right photo. As seen in the photos, Lee Yoo Young is said to exude a cheerful energy on set, where she brightens the atmosphere for her fellow actors and staff members.

Kim Min Jung plays the role of Park Hoo Ja, the fourth daughter of a legend in the moneylending industry, and the bottom left photo shows the actress monitoring her scenes diligently. Her attention to detail can be seen even through the photo.

Meanwhile, Tae In Ho, who portrays rookie politician Han Sang Jin, gets playful with the camera in the bottom right picture. The actor has been receiving praise from viewers for his convincing acting in the drama, with some commenting, “He looks just like a real politician!” 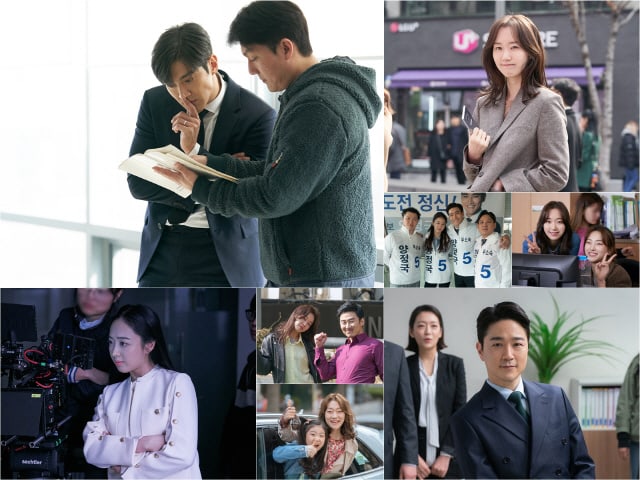 Many other actors such as Yang Dong Geun, Lee Joo Myung, Kim Ki Nam, Park Kyung Hye and Heo Jae Ho can also be seen smiling on set as they show off their close friendships.

The producers of “My Fellow Citizens” commented, “With the cast’s passion for acting and their incredible chemistry, we have been able to create a fun atmosphere on set. This has improved the overall quality of the production and made the drama even more immersive.”

They continued, “Yang Jung Gook’s transformation began with the candidates’ televised debate on the April 23 episode, and starting from Episodes 17 and 18, the campaign will become even more exciting, so please look forward to the stories that will unfold from now on.”

“My Fellow Citizens” airs every Monday and Tuesday at 10 p.m. KST.