Yeo Jin Goo is sporting an orange prisoner jumpsuit as a robot in his upcoming drama “Absolute Boyfriend.”

“Absolute Boyfriend” is about special effects makeup artist Uhm Da Da (played by Girl’s Day’s Minah) who has not had much success with love, and Zero-Nine (played by Yeo Jin Goo), a humanoid robot with a romantic heart built to become the perfect boyfriend.

Zero-Nine is born from Chronos Heaven’s “Romantic Boy” project. With handsome looks, he is programmed to exude and send his sweet charms to his “girlfriend.” When a Chronos Heaven employee saves him from danger and helps him escape, Zero-Nine stumbles into the waiting room of Uhm Da Da’s special effects makeup team and into her life.

In the released photos, Yeo Jin Goo wears the glaringly bright orange jumpsuit of a prisoner and is frozen in place with a blank expression. 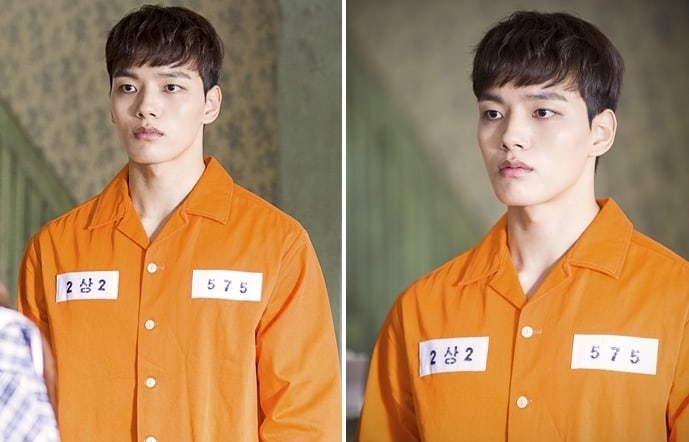 It was reported that on the day of filming, Yeo Jin Goo greeted everyone cheerfully on set and perfectly transformed into Zero-Nine as he put on his jumpsuit. He immersed himself in rehearsals as he carefully controlled his tone and actions.

The production staff stated, “Yeo Jin Goo did a lot of research in how to express, voice, and move as the unique character of a humanoid robot that researches love. He has transformed into Zero-Nine in a realistic yet fantasy-like way. Please look forward to a new kind of charm Yeo Jin Goo will show and the fun, sweet, and touching emotions he will convey.”

“Absolute Boyfriend” will air its first episode on May 15.

Yeo Jin Goo
Absolute Boyfriend
How does this article make you feel?