The Boyz is back!

On April 29, the boy group held a V Live broadcast in celebration of their comeback.

Q began, “We’ve been really busy. We filmed a lot of things including the album jacket and MV.” Speaking about performing at SBS’s “Inkigayo” Super Concert on April 28, Kevin said, “I was happy I went to my hometown of Kwangju.”

Sangyeon introduced The Boyz’s new title track “Bloom Bloom,” saying, “It’s a song that conveys the romantic fantasy of a boy’s emotions towards his first love,” and New added, “We captured The Boyz’s refreshing energy.”

Ju Haknyeon revealed, “Everyone participated in this album,” and Sunwoo explained, “It’s an honor to be able to participate in an album that we’re returning with after a long time. I think the fans will like it even more.”

“I can’t believe that my name is included in all three songs,” said Eric. “I made a promise to myself that I’ll work harder and participate in more songs.” 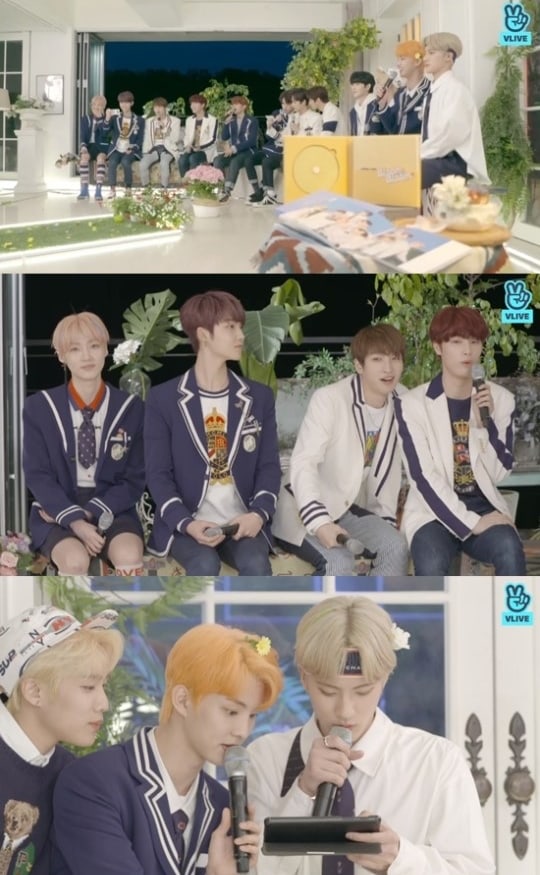 During the broadcast, the boy group exchanged famous lines about first love, made acrostic poems using their fandom name The B, and named which parts they wanted to steal from one another. They also reenacted photos from their album during the unboxing segment.

“I want to do something new,” revealed Hwall. “I think it would be good to do a poetry reading of the ‘Bloom Bloom’ lyrics.” Juyeon added, “I’ll propose to The B with flowers,” and Hyunjae said, “I want to add a lot of flowers to our members’ outfits and enjoy a performance with those outfits.”

Younghoon added, “I want to hold a flower and give it out to fans,” while Sungwoo said, “I want all of the members to do a cute version.” Ju Haknyeon revealed, “I have the same idea as Younghoon. I want to hand a flower to each person.”

Sangyeon suggested, “If we were to get first place, I want to dress up as the Avengers and perform. I’m currently decided on Nebula.” Kevin added, “The fans who come to the broadcasting station always come without eating, so I want to give them chicken skewers instead of flowers.”

New concluded, “I want to meet [fans] while wearing a special outfit.”