On April 30, “PD Notebook,” an investigative journalism TV program on MBC, revealed the results of their investigation into the School of Performing Arts Seoul (SOPA).

The School of Performing Arts Seoul is a prestigious arts-oriented high school that includes many idols as part of their alumni, such as EXO’s Kai and Sehun, BTS’s Jungkook, Suzy, and Red Velvet’s Seulgi. In February, the SOPA students made a YouTube video in which they sang about the injustices they have faced while attending the prestigious school.

The video claims that students were forced to perform at events, forced to pay the expenses of these events, and told to act sexy or affectionate toward event attendees. The students also say that there was discrimination against students who resisted and threats against attempted whistleblowers. The video additionally points out a report by a National Assembly member that points to the school’s violation of regulations concerning student admissions, attendance, religious doctrine, and inappropriate use of school funds.

In their April 30 episode, “PD Notebook” reported that SOPA had received a special investigation from the Seoul Metropolitan Office of Education in October 2018. The investigators recommended that the principal be dismissed on disciplinary grounds and that the chief of administration be removed from their post. However, the school foundation did not go through with these recommendations.

It was also reported that the principal of SOPA had appointed his wife as the chief of administration and appointed his children to an administrative post and as a teacher in the acting department at the school. This was permitted under laws established in 2006 that regulate private schools.

SOPA reportedly has elevators that only special members of the teaching staff can use and the garden on the school roof has been restricted for barbecue parties. The students are only permitted to use air conditioning when given permission by a member of the administrative staff. The practice room is not properly ventilated and full of mold, raising questions as to what the school is doing with the students’ expensive tuition, which is three times more expensive than regular high schools.

“PD Notebook” also reported on the events at which the students had been forced to perform. These included everything from awards ceremonies, year-end parties, military concerts, religious events, and even events abroad. It was reported that at one of the year-end parties, drunk female guests would inappropriately touch the male students and ask them to take photos with them.

At the military concerts, the principal would reportedly tell the female students to share their snacks with soldiers, hug them, and take photos with them. 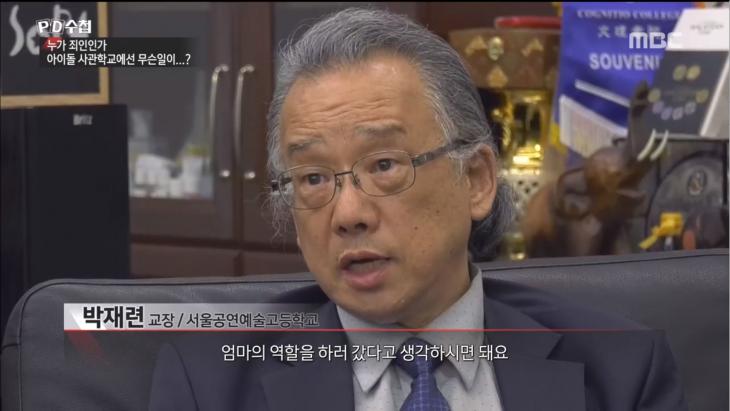 The principal in question is named Park Jae Ryun. He has stated that he does not remember the incidents described above and stated that all concerts were for the benefit of the students. Park Jae Ryun was formerly an elder at a church in Seoul and has also sent his students to perform at various religious events.

The students also performed at a concert in Taiwan. The cost of the trip was an obstacle for many students, but the students reportedly did their best to prepare. However, they were embarrassed at the lack of response from the adults in the audience who did not care about K-pop, hip-hop, or street dance. The students were also shocked at the accommodations, which were old and cramped. When the students complained, they learned that the accommodations cost 30,000 won (about $25) for one night. The students had paid 700,000 won ($600) to go on the trip.

It was also reported that the chief of the administrative staff at the school, Park Jae Ryun’s wife, would use school expenses to accompany the students on their trips.

In private schools, the school foundation’s board of directors have the final say in hiring or firing the teaching staff. If there is no approval from the board, the Office of Education cannot force them one way or the other. The director of the board at SOPA is also related to the principal, Park Jae Ryun.

School of Performing Arts Seoul
How does this article make you feel?