NU’EST chatted all about their new album and comeback!

On May 1, all five members appeared as guests on MBC FM4U’s “Ji Suk Jin‘s 2 O’Clock Date.”

NU’EST recently made a comeback with their mini album “Happily Ever After” and title track “BET BET.” On promoting as a whole group for the first time in three years, JR said, “I saw Minyhun a lot when he was promoting with Wanna One. So rather than feeling new, it feels like NU’EST is complete at last.”

When DJ Ji Suk Jin asked about the members of NU’EST participating in the production of the album, Baekho replied, “I wrote a lot of the songs and lyrics. I spoke a lot with the members about what they wanted to say and show. JR wrote all of his rap.”

Speaking about NU’EST’s concert “Segno,” which was held from April 12 to 14, Ren commented, “We had a concert at the Olympic Gymnastics Arena, which we had always dreamed about. It had only been a dream, and I cried once I saw that L.O.Λ.Es had filled the seats. I cried a lot on the first and second day, and I calmed down a lot on the third day.” Minyhun added, “I tend to hold back my tears, but I became emotional that day. I worked hard to hold them back.”

When the DJ then asked who cried the most, Baekho revealed, “I became emotional, but Aron was basically bawling.” 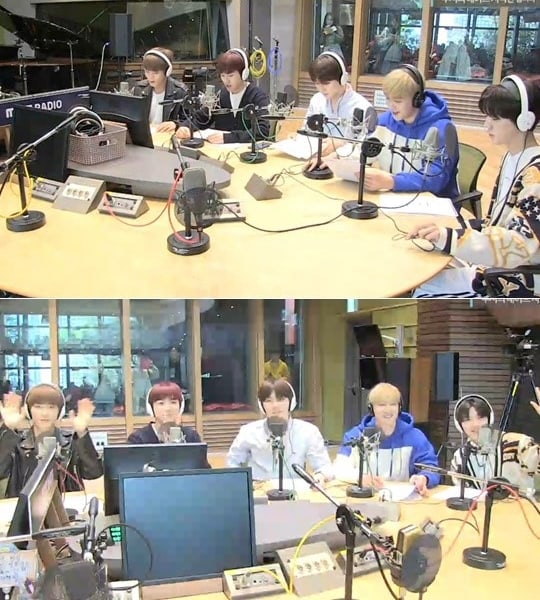 “At our last concert, JR revealed his abs,” said Ren. “So I made a promise with our fans that I would also reveal my abs at our next concert. I’m currently working hard to make them. I’ll make sure to show them once our next concert is confirmed.” DJ Ji Suk Jin then praised the idol by saying, “Your appearance is complete. Your body is even nice.”

Aron, who’s a Korean-American from Los Angeles, talked about how he’s fully adjusted to life in Korea. He said, “I dream in Korean now,” and chose pork rinds as his favorite dish. Expressing love for one another, Ren and Baekho said, “There has never been an issue between the members about food. We’ve been together for a while, so we know each other’s tastes.”

NU’EST concluded, “We’ve returned as a whole group for the first time in three years, so please love our album a lot and we’ll also give a lot of love to L.O.Λ.Es.”

NU'EST
Ji Suk Jin's 2 O'Clock Date
How does this article make you feel?