NU’EST Talk About Their Real-Life Personalities And Friendship

On the May 1 broadcast, NU’EST appeared all together as a group for the first time since 2014.

The boy group introduced their sixth mini album “Happily Ever After,” and each member took turns showcasing the choreography and “killing part” for their title track “BET BET.” Aron also sang Ne-Yo’s “So Sick,” the song that he performed during his Pledis Entertainment auditions, and received praise for his voice.

Describing his personality, Minhyun said, “There aren’t ups and downs in my mood, and I’m always consistent.” JR confirmed this, saying, “I’ve known him for nine to ten years since our trainee years, and I can count with my one hand the times that he’s gotten mad. There have only been one or two times.”

The two members then spoke about the one rare occasion when this happened. Minhyun explained, “JR practiced until late at night and woke me up while joking around,” and Ren said, “There was a doll called Tosoon, and he woke him up with that.” Minhyun continued, “He was fooling around, but I got mad because I was sleeping.” JR added, “He doesn’t even get mad. It was more like, ‘Oh please.'” 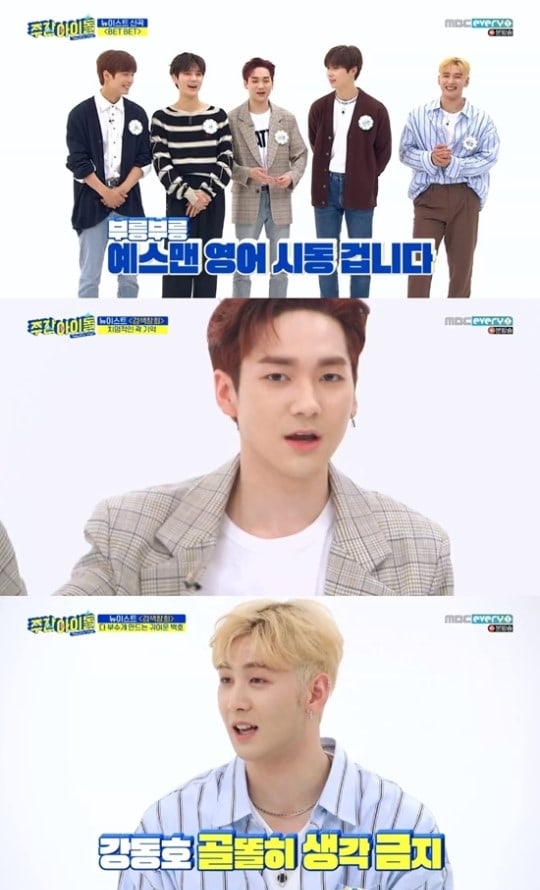 Ren chose his friendliness as a positive trait of his personality, and Baekho commented, “Ren is really warm-hearted. There’s a convenience store next to our dorm, and he’s always close with the part-time workers.” “I feel happiness from those kinds of things,” added Ren.

Ren also made everyone laugh with his abundance of excitement on set, and the members stated that it’s how he always is. “There are members who sleep or play games, but he always livens up the atmosphere,” said Minyhun. Ren added, “Even when I’m alone, I dance with a disco ball and a tie that fans gave me.”

JR spoke about his duality and said, “I think people say this because my appearance on stage is different from my usual appearance. I feel so grateful. I have two different kinds of charms.” Minhyun added, “He seems like a Doberman when practicing, but he’s really cute in everyday life.” With a request for JR to show off his dance moves, MC Kwanghee said, “I was so surprised while watching a clip of you dancing at your concert. It was insane. You ripped apart [the stage].”

Ren then shared the story behind the children’s book “Find the Heart” (literal title) that he created for his fans. “It felt like I was always only receiving things, so I made it thinking that it would be nice to write a children’s book,” stated Ren. Each NU’EST member portrayed a character in the book and reenacted the story. 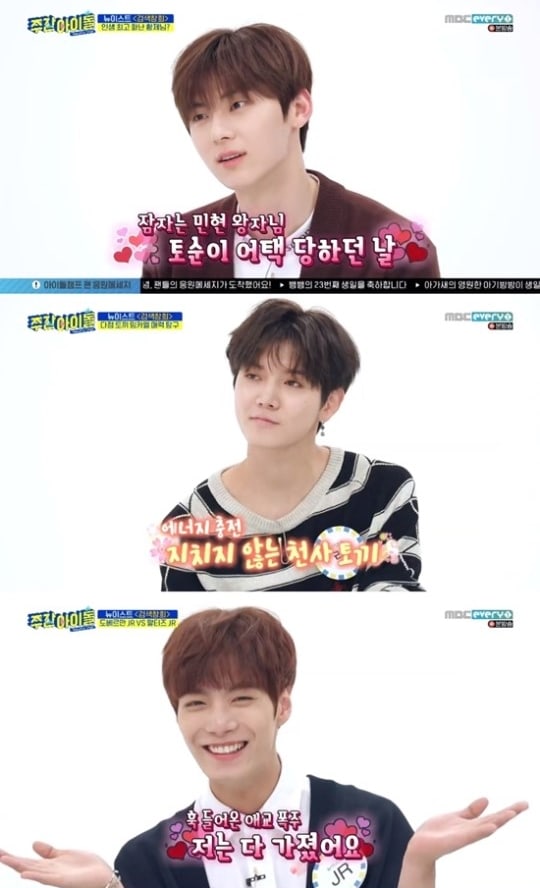 NU'EST
Weekly Idol
How does this article make you feel?