Ha Sung Woon had some good advice for Park Woo Jin ahead of his “Law of the Jungle” expedition!

AB6IX’s Park Woo Jin is set to appear in the upcoming “Law of the Jungle in Lost Jungle” series, which will begin airing on May 11. The series will feature a group of idols that includes Park Woo Jin, gugudan’s Mina, iKON’s B.I, and Red Velvet’s Yeri.

A video was shared on May 2 showing Park Woo Jin packing for the trip. Sharing that he’d been watching “Law of the Jungle” to figure out what he should take, he packed a fire striker, axe, knife, emergency medical supplies, sunscreen, and bug repellent he received from fans.

Still feeling like he could pack more, Park Woo Jin called up Ha Sung Woon, who was his fellow member in Wanna One and had already been on the show himself. Hoping for some tips, Park Wo Jin asked, “I’ve packed the usual stuff, but I feel like you’ll have something to say as someone who’s been there before.” 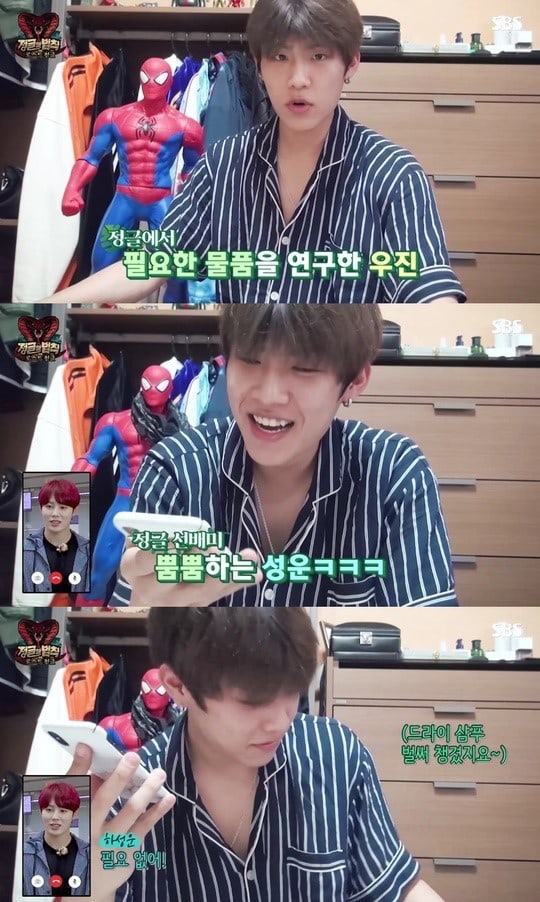 Ha Sung Woon shared supportive words as he said, “It’s not easy, but I’m sure you did well.” He also said, “It must be lonely for you. I at least went with Ong Seong Wu.” When Park Woo Jin confessed that he was half nervous, half excited, Ha Sung Woon reassured him and said, “Just do what you want to do and you’ll do well. Don’t get hurt, don’t get sick, and crush it!”

Thanks to the phone call, Park Woo Jin looked more at ease as he finished packing for his trip.

Wanna One
Law of the Jungle
Park Woo Jin
Ha Sung Woon
AB6IX
How does this article make you feel?