IZ*ONE’s Miyawaki Sakura and Kang Ho Dong reunited on JTBC’s “Ask Us Anything”!

On the May 4 broadcast of the variety show, IZ*ONE appeared as guests, and the cast tried to guess which name belonged to which member.

Kang Ho Dong immediately called out Miyawaki Sakura’s name, as the two stars were cast members together on the first season of Olive’s “Everyone’s Kitchen.” During their time on the cooking variety show, Kang Ho Dong and Miyawaki Sakura formed a duo called “KuraDong” and showcased adorable chemistry together.

Kim Heechul then asked Miyawaki Sakura what their relationship had been like on “Everyone’s Kitchen,” and the IZ*ONE member replied, “Kang Ho Dong was my first friend in Korea except for IZ*ONE. My best friend. Right?” Agreeing with her, Kang Ho Dong added, “Yes. I’m Miyawaki Sakura’s first Korean friend.”

When Lee Sang Min asked if she had known of Kang Ho Dong while living in Japan, the idol answered, “I didn’t know him.” Kim Young Chul asked, “He’s not famous in Japan, is he?” and Lee Soo Geun joked, “He’s famous as a Korean mukbang [eating broadcast] YouTuber.”

Miyawaki Sakura commented, “There’s no one like him in Japan.” Kim Young Chul responded, “But there are sumo wrestlers,” and she added, “There’s no one who has that big of a face.” Kim Heechul asked if she was still scared of Kang Ho Dong, and the IZ*ONE member said, “Now, he’s a cute friend.” 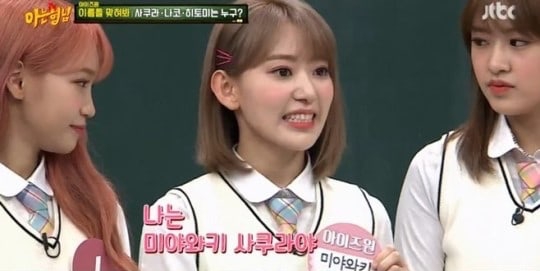 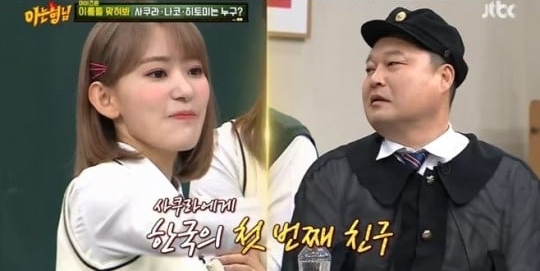