On the latest episode of MBC’s “The King of Mask Singer,” the identity of Chocolate Factory That’s Free For Children was revealed to be a former girl group member with a unique voice.

The May 5 episode of the singing competition featured contestants vying to take the crown from the reigning king. In the second round, Chocolate Factory went up against Look At This Che Guevara and sang BOL4’s “Some,” while her competitor sang Crush and Taeyeon’s duet “Don’t Forget.”

In the end, Che Guevara advanced to the third round after winning with 73 votes to Chocolate Factory’s 26 votes.

Chocolate Factory then took off her mask to reveal she was none other than former Secret member Jun Hyosung! Everyone was amazed by panelist Giant Pink, who had guessed her identity correctly. 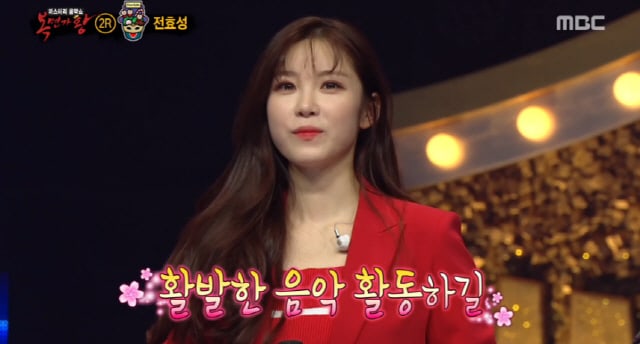 Hyosung shared that she is starting activities again after a long hiatus. She explained, “I normally like working, so I had a hard time during my hiatus. I recieved a lot of comfort from my cat while I was resting. If I hadn’t become a singer, I would have liked to work with animals. I got my certifications as a therapy pet manager and mortician during my break, so it was a fruitful time.”

After the show, the singer posted pictures of herself posing with her mask on Twitter with the caption, “I was so happy to be able to sing after such a long time.” She also wrote in the hashtags, “Thank you,” before adding, “My fans are so quick to catch on.”

Secret
Jun Hyosung
The King of Mask Singer
How does this article make you feel?