On May 5, Khalid attended BTS’s world stadium tour “Love Yourself: Speak Yourself” at the Rose Bowl Stadium in Los Angeles. Khalid was spotted freely enjoying BTS’s concert, and he also uploaded a video to his Instagram story of him singing along to Jimin’s solo track “Serendipity,” saying, “This my shit” while hyped up for the song. 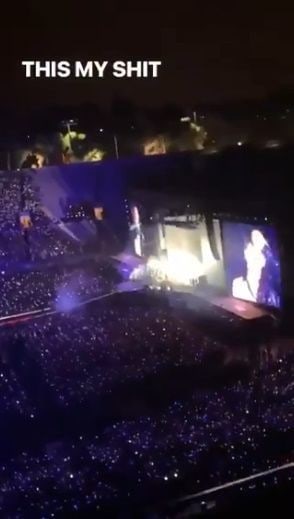 Khalid also met with BTS after their performances and took a photo with them which he uploaded to his Instagram. In one picture, he’s posing brightly with the members, and in another, Khalid and BTS are smiling as they have a fun time talking to each other.

BTS also uploaded the photo onto their Twitter with the caption “Welcome Friend!!” showcasing their friendship even more.

After successfully completing the two Los Angeles performances, BTS will be heading to Chicago for the next leg of their stadium tour!

BTS
Khalid
How does this article make you feel?