The poster shows two dark figures appearing to be waiting for something outside the same place at different times.

As we also wait for the first episode to air, here are some reasons to look forward to this drama!

“One Spring Night” will be the second drama after “Pretty Noona Who Buys Me Food” that director Ahn Pan Seok and screenwriter Kim Eun are teaming up on. With their previous drama receiving much praise for realistically portraying a couple’s romance last year, the anticipation for their second collaboration is even higher. How Ahn Pan Seok and Kim Eun portray a romance that blooms in ordinary situations will be something to look forward to in “One Spring Night.”

Chemistry between Jung Hae In and Han Ji Min 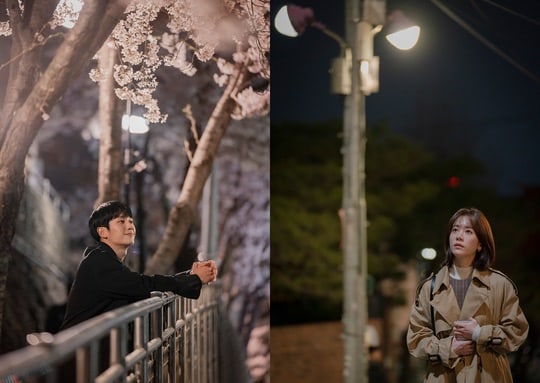 “One Spring Night” will tell a romantic story between librarian Lee Jung In (played by Han Ji Min) and pharmacist Yoo Ji Ho (played by Jung Hae In). The two will portray the subtle romantic feelings an ordinary couple go through, as well as the emotions one experiences when reality and feelings clash. The chemistry between the two definitely plays a part in increasing the excitement for the upcoming drama.

“One Spring Night” is a romance about a man and a woman looking for love and the wave of emotions they experience when the love that they had been searching for slowly seeps into the routine of their daily lives. The drama is not about destiny, but real love. The realistic depiction of romance may get viewers hooked to the drama as they relate to the characters.

A source from the drama stated, “‘One Spring Night’ will portray a realistic love story between a man and a woman who fall deeply in love with each other. Please look forward to ‘Spring Night’ that will be completed with the collaboration of director Ahn Pan Seok, screenwriter Kim Eun, Han Ji Min, Jung Hae In, as well as other actors and crew members.”

“One Spring Night” will premiere on May 22.