Oh My Girl Talks About Their 1st Place Promise, Overseas Tour, And More

Oh My Girl talked about coming back with their first full album, and shared their future plans!

On May 8, Oh My Girl celebrated the release of their album “The Fifth Season” with a showcase at the Seoul Olympic Park K-Art Hall.

“The Fifth Season” comes eight months after their mini album “Remember Me” was released last September. The title track features a modern electronic dance sound that is backdropped by an emotional orchestration and a drumbeat to express the feeling of a pounding heart.

In regards to their first full album, Hyojung explained, “We took on the challenge of a lot of songs that we weren’t certain would suit Oh My Girl. As a result, this album contributes to our diversity and expands our range for the future. We’re so grateful to have had many composers write songs for us. We worked hard to pull off the songs, so we would be thankful if you look on us kindly.”

Oh My Girl wowed with their transformation into ballerinas for this comeback, and the members wore what they described as “scary ballerina outfits.” Arin stated, “We’ve tried a lot of different concepts in the past, but we felt that this time was quite a new challenge. We thought we should work hard to get in shape.”

When asked what they would do if they achieve No. 1 on a music broadcast or on the music charts, Jiho replied, “If we get No. 1, we’ll wear the scary ballerina outfits we mentioned before and do a performance.” She made the others laugh when she said, “It will be the full outfits. We’ll even do the hair.” 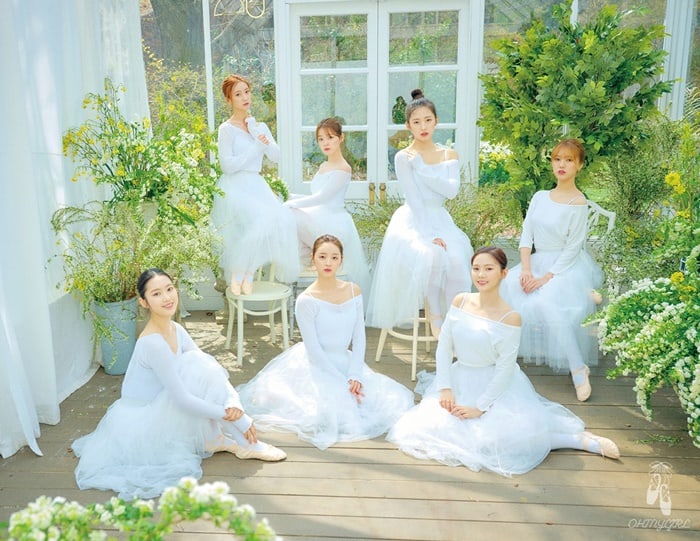 From the end of last year to the beginning of this year, Oh My Girl performed on their first world tour. Seunghee expressed her thankfulness to their overseas fans, saying, “When we went on tour, [international fans] sang along to all our Korean lyrics, even following the rap and adlibs. I thought I should work hard to be healthy and develop my stamina to give strength to the people who listen to our music. I think it was an opportunity for me to mature both inside and outside.”

During this comeback, fans can expect energetic performances from the group. Mimi stated, “Usually, springtime isn’t very warm. However, this spring will be really hot [for us]. We want to show our passion and receive a lot of love from fans.”

Oh My Girl recently celebrated their fourth anniversary. Hyojung commented, “I think that over these four years we were able to achieve our first win and release our first album thanks to our step-by-step development. Even if Oh My Girl progresses a bit slowly, I want to go on for a long time and be a group that lives in the memory of many fans. I am so happy that we’ve been able to achieve our goals one by one. In the future, we want to work hard and give hope to our fans through our music.”

Oh My Girl
XPN
How does this article make you feel?